The performances of chelfitsch employ rambling dialogue that often sounds like private mutterings and a “noisy” style of physical expression that has also been recognized as contemporary dance, to depict the elusive and nondescript state of today’s young people in Japanese society. Since being invited to Belgium’s Kunsten Festival des Arts and coming to the attention of the world’s festival directors in 2007, chelfitsch has been increasingly active on the international scene. To date, its representative work, Sangatsu no Itsukakan (Five Days in March) has been performed in 14 cities in nine countries and its director Toshiki Okada and his group members have created new works jointly with international festivals and toured overseas. These efforts and opportunities have brought about a search for environments to enable further artistic experimentation. In this latest interview with Toshiki Okada, he talks about the insights that have come from performing overseas.
Interviewer: Chiaki Soma, Program Director of the Festival/Tokyo

岡田利規（おかだ・としき）
Born in Yokohama, 1973. Graduated from Keio University, Faculty of Business and Commerce. In 1997, Okada began theater activities as the one-man unit “chelfitsch.” The name chelfitsch was created to represent a child’s mispronunciation of the English word selfish. In order to create “works with the potential to go further” Okada uses a methodology, but he makes a point of “not holding on to the methodology to the point where it holds back the work but quickly letting go of it,” which may be strange sort of methodology in itself for creating plays. With the release of the work Karera no Kibo ni Mihare in March of 2001, Okada changed to a style using “super real” Japanese language. This produces works that have a slow-moving and noisy physical aspect. The Yokohama ST Spot became the base for his theater activities. In 2004, Five Days in March was the winner of the 49th Kishida Drama Award. The judges of this award praised Okada’s work for the strong sense of questioning it brings to the systems of theater and the fresh ideas he uses to turn that doubt into creative impetus. The work was also acclaimed for the skill with which it brings out the insubstantiality of present conditions in Japan. The physical presence and movement Okada brings out in his actors have also been recognized as dance, with his dance work Cooler being chosen as one of the finalists in the TOYOTA CHOREOGRAPHY AWARD 2005. In 2007, his play Five Days in March was invited to the Kunsten Festival des Arts in Belgium, which led to increased activities overseas. In 2007, Five Days in March was performed in Brussels and Paris and in 2008 Okada created the work Free Time in a collaborative production with three international festivals (KUNSTENFESTIVALDESARTS/Brussels; Wiener Festwochen/Vienna; Festival d’AUTOMNE/Paris) In 2009 his overseas activities continued, including a performance tour to nine cites in North America.
http://chelfitsch.net/

Kunsten Festival des Arts This festival is held every May in Brussels, Belgium. It is a contemporary arts festival focusing primarily on the performing arts. Known for its avant-garde program, it is recognized as one of the “antenna” festivals of the international contemporary arts scene. In contrast to France’s Avignon Festival with its program of mainstream European theater, KFDA strives to present a program with more experimental works and a variety of artists reflecting the wider diversity of arts from around the world. With its own initiatives, the festival seeks to discover and support the production of works by young artists not only from Belgium but throughout Europe and also artists from developing countries that lack arts support systems. In addition to these many productions of young artists’ works, KFDA works to encourage the careers of these artists from a long-term standpoint by involving them in multi-year collaborative production efforts. At the same time, the festival produces new works with established artists from Belgium and the rest of Europe and provides the venues for their world premieres. As one of the epicenters creating new trends in the world’s performing arts, KFDA enjoys strong brand equity. More than 50% of the KFDA program consists of works produced by KFDA or created through KFDA-led collaborative efforts, and half of these will be world premieres in any given year. The founder of KFDA, Frie Leysen , retired as artistic director after the 2006 festival, after which the post was taken over by her assistant artistic director, Christophe Slagmuylder .

Who Knows We Are Not Injured like the Others? (2010)
(Feb. 14 – 26, 2010 at ST Spot; Mar. 1 – 10, 2010 at Yokohama Museum of Art, Lecture Hall)
This play depicts events following the historic administration change from the Liberal Democratic Party’s long decades in power to the forming of the new government by the Democratic Party of Japan following the Lower House elections of Aug. 30, 2009. The play unfolds with actors making their entrances and exits on a bare stage space with no set. What appears to be a normal, happily married couple who are about to move to their new high-rise condominium are spending time at home as usual. We see the planned visit of the wife’s colleagues to the home. After they leave, the couple is alone again at night …. This ambitious work attempts to use the actors’ physical presence and actions as a medium to communicate the “insecurity within happiness” or the “happiness within insecurity” lodged in the hearts and minds of the audience.
Photo: Kazuyuki Matsumoto 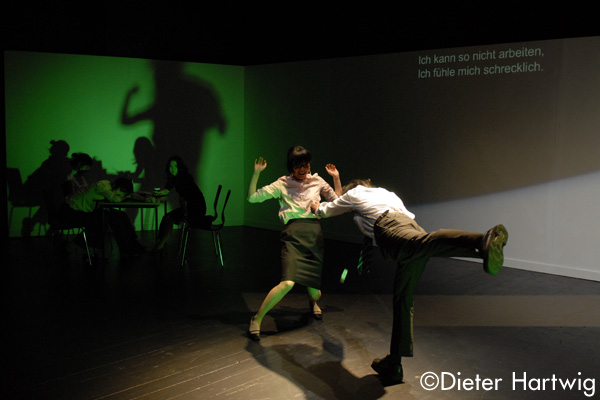