Held every May in Brussels, Belgium, the Kunsten Festival des Arts is a contemporary arts festival known for its cutting-edge program and for introducing many talented new artists. All this plus the active pursuit of international collaborative works that bring to the festival a large number of world premieres—roughly half its program—has made KFDA as one of the “antenna” festivals of the international contemporary arts scene that attracts festival directors from around the world. In this interview the festival’s new artistic director, Christophe Slagmuylder, talks about the history and the future of this festival that has served as the springboard to international success for many artists like Japan’s Toshiki Okada. Interviewer: Chiaki Soma

Christophe Slagmuylder
Born in Brussels in 1967, Christophe Slagmuylder studied contemporary art at Universite Libre de Bruxelles (ULB) and subsequently became an instructor at Brussels’s La Cambre (l’Ecole Nationale Superieure) (ENSAV). From 1994 he became involved in production work with the companies of choreographers Michelle Noiret, Pierre Droulers and born Thomas Hauert. and also with the PARTS school founded by choreographer Anne Teresa De Keersmaeker, leader of the Rosas company. Then, after working as assistant artistic director for a theater in Brussels joined the Kunsten Festival des Arts (KFDA) staff in 2002 and worked on the festival programming with the artistic director, Frie Leysen. Since the retirement of Leysen from KFDA in 2006, he took over as the festival’s artistic director. 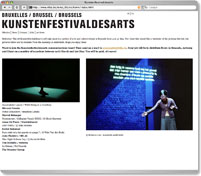 This festival is held every May in Brussels, Belgium. It is a contemporary arts festival focusing primarily on the performing arts. Known for its avant-garde program, it is recognized as one of the “antenna” festivals of the international contemporary arts scene introducing talented new artists. In contrast to France’s Avignon Festival with its program of mainstream European theater, KFDA strives to present a program with more experimental works and a variety of artists reflecting the wider diversity of arts from around the world. With its own initiatives, the festival seeks to discover and support the production of works by young artists not only from Belgium but throughout Europe and also artists from developing countries that lack arts support systems. In addition to these many productions of young artists’ works, KFDA works to encourage the careers of these artists from a long-term standpoint by involving them in multi-year collaborative production efforts. At the same time, the festival produces new works with established artist from Belgium and the rest of Europe and provides the venues for their world premieres. As one of the epicenters creating new trends in the world’s performing arts, KFDA enjoys a strong brand equity. More than 50% of the KFDA program consists of works produced by KFDA or created through KFDA-led collaborative efforts, an half of these will be world premieres in any given year. The fonder of KFDA, Frie Leysen, retired as artistic director after the 2006 festival, after which the post was taken over by her assistant artistic director, Christophe Slagmuylder. Attention in the arts scene is now focused on the changes Slagmuylder will bring to KFDA.
http://www.kfda.be/temp_08/splash/video08.html 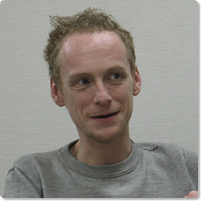