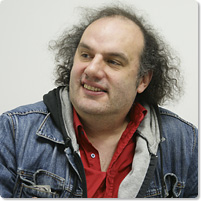 Berlin’s HAU as an epicenter of the performing arts — What’s the ideas behind its aim to “Create friction in the world?”

Matthias Lilienthal is a vibrant “warrior” of the German performing arts world who re-established the former East Berlin’s Volksbuehne am Rosa-Luxemburg-Platz as an experimental theater after the fall of the Berlin Wall and in 2003 took the post of artistic director of Hebbel am Ufer (HAU), an organization with three performance spaces in the Kreuzberg district of Berlin, which is home to a large immigrant population today. Working with performance groups like Rimini Protokoll in the pursuit of reality and documentary theater, Lilienthal has given birth to chain of performing arts projects unapologetically aimed at creating “friction” in the world. These activities have made him one of the most talked about figures in his profession. With 2009 marking the 20th anniversary of the fall of the Berlin Wall, the city is now in the midst of a rush of commemorative events and festivals. Lilienthal is also involved in the planning of a “Japan Festival” scheduled to take place in Berlin this October. In this interview we talked with Lilienthal about his stance of always presenting projects that look at contemporary society with a sharp and insightful eye, HAU’s activities and his outlook on culture generated by cities like Berlin or Tokyo. (Interview: Makiko Yamaguchi)

Does this mean that your Japan feature will be an attempt to bring the expressions of the images and phenomena of Tokyo to the stage?
We put them all on the stage. And then we think about what we do when we have no more money for consumption. Wouldn’t it be a fine party of desperation? We have no money but still we dance. And I am also thinking that maybe we can connect Berlin and Tokyo through a bond of electronic music.
It may be a question out of the blue, but can I ask you why you are doing theater?
I don’t know. I don’t know the answer myself. It just happened this way.
What do you think you have gained and achieved by doing theater?
I haven’t gained anything. If there were anything, it would only be that to some small degree I have opened the theater to the immigrant population and got them to come to the theater a few times. I can say with certainty that they have been given the opportunity to encounter art in a broad sense. Or, by showing the near-sighted German audience something of the things that are happening outside their world, we may have succeeded in opening the possibilities for internationalization. That’s about all. I don’t think that art can change society or the cities anymore. Thinking that it can is nothing but a dream.
But you will still keep doing it, won’t you?
Of course.
For the sake of world revolution?
It is true that I have sought to resist the realities of society in the past and it is still an important thing for me. But for me world revolution sometimes means doing an art project. 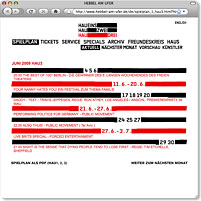