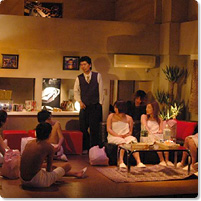 The setting is one room in a high-class condominium. It is in fact a club that specializes in gathering men and women together for sex parties. The back of the stage is a loft that is designed so that its interior is visible from the main room below. The system is that the gathered men and women, wrapped in just a bath towel, talk until a pair decides to go up to the loft for sex. After they finish, they return to the main floor and the next couple goes up. This process is repeated through the night until dawn.

The play begins as the random gathering of five men and five women are assembling in twos and threes and it ends when they leave the room with the dawn of the next day. The plot contains no dramatic events but simply traces the occurrences of this single night.

At the beginning of the play we see the gathering of strangers wrapped only in bath towels and an embarrassed silence. Gradually as the men begin to talk among themselves and the women among themselves, they begin to relax and finally Man 1 and Woman 4 become the first to climb up to the loft.

From that point until the end of the play, several more couples go to the loft and while those remaining downstairs listen to their exchanges. The conversations that are heard are about things like what TV stars they like, what their jobs are and what woman they want to have sex with next.

The story may seem like one with no major events but there is a different type of dramatic development. It is the foolishness of people who allow themselves to be manipulated by their own sexual desires and the way such a place dominated thoroughly by sex removes the intellectual and emotional aspects of human relations and makes so painfully clear the emptiness of the identities of these people when seen in terms of simply their individuality and their jobs. It also lies in the way the playwright succeeds in portraying with almost an affectionate touch the foolishness of these people absorbed in sex.

Daisuke Miura is a playwright and director leading the theater unit “Potsudo-ru” formed by members of the 10th class of the Waseda University Drama Club. Having changed from the extremely dramatic plays of the unit’s early years, Miura changed to a style that avoided drama as much as possible in favor of a “semi-documentary” style that sought a high level of “reality.” That style has further progress to the current one that skillfully works a documentary touch into drama to achieve a style that creates “fiction with reality.” Miura’s play Ai no Uzu (Love’s Whirlpool) won the 50th Kishida Drama Award (2005) after premiering in 2005 as Potsudo-ru’s 13th production.