In the European Union (EU), where culture and creativity play an important role in the economies of the member nations, the Creative Europe program was introduced in 2014 to encourage further development in the culture and creative arts industries. The Creative Europe program is divided into three “stands”: the MEDIA strand (Culture strand (covering initiatives in the audiovisual sector promoting development, distribution and access to audiovisual works), the MEDIA Mundus (cross-sector strand for transnational cooperation in the audiovisual industry, and the Culture strand (promoting cross-border cooperation in culture sector initiatives). For the program’s second fiscal period (2021 – 2027), the budget scale is 2,440,000,000 euros. This is a large-scale increase compared to the budget during its initial fiscal period (2014-2020), which was 1,460,000,000 euros.

Creative Europe has two principal aims. One is the preservation, development and promotion of cultural and linguistic diversity and heritage in the European context. The second is increasing the competitiveness of the cultural and creative industries, particularly in the audiovisual field, including film, video and video games and the like, ultimately increasing their potential economic strength. Cultural and creative industries are important to the European Union, where they comprise 4.2% of the GDP of member nations, and they are responsible for 3.7% of employment. By working together to distribute and share the works arising from the individual EU member nations, with their great diversity in cultural backgrounds and language, it should be possible to leverage the advantage of the European “single market” and to increase their competitiveness in the global market, which will surely contribute to the further development of the European economy.

The Creative Europe program is divided into three “strands”: the Culture strand, encompassing architecture, cultural heritage, design, literature and publishing, music, the performing arts and more; the MEDIA strand, comprised of the film and audiovisual sectors and the Cross-Sectorial Strand, devoted reinforcing collaboration between initiatives in different cultural and creative sectors. With each strand having specific types of initiatives it focuses its support on, the three strands solicit proposals based on their set policies, and those projects that qualify through the selection process become eligible for financial support. While eligibility is open to organizations from the cultural and creative sectors of the EU Member States, as well as Non-EU countries, subject to certain conditions, countries of the European Economic Area (EEA) (*1), candidate/potential candidate countries and European Neighbourhood Policy (*2) countries can also participate in the program.

Notes:
*1) A framework that allows member states of the EFTA (European Free Trade Association) to join the European single market without becoming a member state of the EU. As of 2022, it includes the 27 EU member states and the EFTA member states of Iceland, Luxemburg and Norway, with the exception of Switzerland.
*2) An EU initiative to promote ties with neighboring nations, adopted in 2004 to curb any adverse effects that may accompany the large-scale expansion of the EU at that time. Regional frameworks exist to include neighboring Mediterranean countries (Algeria, Morocco, Israel, etc.) and the East European countries (Azerbaijan, Georgia, Ukraine, etc.). 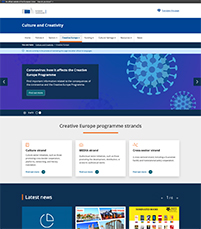