A nonprofit organization, ap bank was founded in 2003 by music producer Takeshi KOBAYASHI, musicians Kazutoshi SAKURAI and Ryuichi SAKAMOTO under Japan’s general incorporated association provision. The ‘ap’ of the name stands for both Artists’ Power and Alternative Power.

Funded by capital raised by these three prominent artists in the Japanese music industry, in 2004 the organization began its support of individuals and organizations involved in the renewable energy and environmental conservation sectors through low-interest loans. Beginning with 15 loans provided for its first fiscal term in May of the same year, ap bank had since supported a total of over 80 groups and individuals by its 11th fiscal term in 2009. The projects that it has endorsed have helped address social issues of high relevance, including environmental issues both foreign and domestic, food and agriculture, and the preservation of traditional industries.

Founded after the Niigata Chūetsu offshore earthquake of 2007 the “ap bank Fund,” in addition to providing educational support for children of the affected areas, has also provided student loans and financial aid to regional public organizations. After that, ap bank has continued support activities on a regular basis, such as setting up volunteer centers to contribute to recovery after natural disasters in areas around Japan. Funds raised through the formation of a Bank Band by Kobayashi and Sakurai and its attendant concerts, an open-air ‘ap bank fes’ music festival and various events featuring diverse creators from such fields as music, the visual arts, advertising, DJs and VJs have been used to provide loans and finance ap bank projects.

Since 2017, ap bank has held a comprehensive arts festival named Reborn-Art Festival, devoted to “Art,” “Music” and “Food,” in areas affected by the 2011 Great East Japan Earthquake and Tsunami. The event has subsequently been hosted by the affected areas of Ishinomaki and Onagawa city and the Oshika peninsula in Miyagi Prefecture. Held for the third time, the “Reborn-Art Festival 2021-22” has been divided over two separate periods, first during the summer of 2021 (1st period) and the second to be held in summer 2022 (2nd period), amid concerns over the COVID-19 pandemic.

Often held in remote locations far from urban areas, ap bank events provide opportunities for coming in contact with art and music in a rural setting, eating organic foods, as well as providing opportunities for separating and recycling trash, thus providing the ideal setting for the younger public to experience issues such as renewable energy and those of the environment, first-hand.

- “spoon”
Amid the COVID-19 crisis, spoon aims to support single-parent families in light of the increasing difficulties they face by providing them with food. Foodstuffs are distributed to affected families through aid organizations.

- “ap bank Fund for Japan”
This project aims to aid in reconstruction efforts of areas affected by the Great East Japan Earthquake and Tsunami. In addition to volunteer efforts including distribution of boiled rice and the raking of accumulated silt, its projects include ones aimed at supporting children in the affected areas through such efforts as the provision of student loans and providing such support as in the area of human resources in tandem with regional non-profit organizations.
http://apfj.apbank.jp/

- “Reborn-Art Festival” Recovery from the Great East Japan Earthquake and Tsunami
2This comprehensive arts festival is focused on “Art,” “Music” and “Food,” was launched in 2017 and focuses on the cities of Ishinomaki and Onagawa and the Oshika peninsula in Miyagi Prefecture. The project aims to act as an impetus in the region’s reconstruction through such efforts as offering modern art and music in the backdrop of nature and programs to provide food prepared from local produce.

ap bank set up solar panels on the “KURKKU FIELDS” SOLAR FARM “Tagayasu Kisarazu Nojo (Arable Kisarazu Farm)” in Kisarazu City, Chiba, with ongoing sales of the solar energy produced. Proceeds from the sales of the solar energy from the SOLAR FARM go to various educational programs on the environment and nutrition provided by FLACC, an organization intended for encouraging the interaction between city and countryside.
https://www.apbank.jp/project/flacc/ 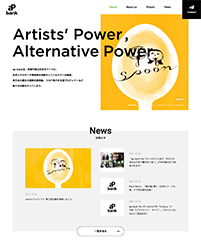