This networking event has been held annually in Bangkok, Thailand, since its first holding in 2017. With its strong ambition to become Southeast Asia’s performing arts “launchpad” where the world can discover the region’s talents and creativity, BIPAM is held with cooperation from the Yokohama International Performing Arts Meeting (YPAM), the Performing Arts Market in Seoul (PAMS) and others. During its five-day run, the BIPAM program is full of showcases, talk events, workshops and the like. In addition to artists, practitioners and academics from around Thailand, the event also draws participants from the other countries of Southeast Asia to join in discussions about shared issues in the region and other programs planned and directed in line with BIPAM’s original broad vision to embrace all of Southeast Asia.

The outbreak of the COVID-19 pandemic in 2020 led to the start of BIPAM’s Under the SEA webinar series, featuring roundtable discussions instead of the event’s usual in-person meetings. From August through October, one of the 11 Southeast Asian countries was chosen as the subject for the weekly webinars with roundtable-type discussions dealing with the respective countries’ current performing arts landscape and what art-makers envision for the future. With the continuing effects of the COVID pandemic in 2021, the BIPAM was conducted completely online, with all of the showcases and discussions conducted on a fully online platform.

From 2020, in addition to the once-a-year meeting, a new joint project between Festival/Tokyo and BIPAM titled The City & The City was launched. As the ongoing COVID pandemic limited participant travel between the two cities of Tokyo and Bangkok, the projects were carried out through online exchanges between artists from Japan and Thailand. The themes of the projects were “Divided Senses” in 2020 and “Mapping From Home” in 2021, and the project results were displayed both in real-life and online. 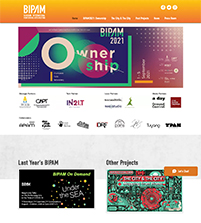