WAAE International Conferences
Since the first conference in 2007, the WAAE conferences have been held in different countries around the world. As of the 8th holding in Frankfurt, Germany in 2019, they have been attended by some 150 arts professionals from 45 countries. The purpose of the conferences is the presentation of the UNESCO agenda and reports on activities of IDEA (theatre), InSEA (visual arts), ISME (music) and WDA (dance) to the gathered arts professionals and to hold discussions/evaluations on them. These include statements about the state of arts in countries around the world and future projects planned by WAAE and discussions about future cooperative activities with UNESCO. At the conference localities, performances and exhibitions of works (music, theater, drama, dance, fine arts) by local students and exchange students from abroad are also held.

*WAAE international conferences: Since the 1st international conference held in Hong Kong (2007), the 2nd in Taiwan (2008), 3rd in the UK (2009) 4th in Finland (2012), 5th in Australia (2014), 6th in China (2016) 7th in New Zealand (2017) and 8th in Frankfurt (2019) have been held.
Holding the annual UNESCO International Arts Education Week
At the 36th UNESCO General Conference in 2011, announced that “the fourth week every May would be designated International Arts Education Week” and that for each year the contents would be decided by WAAE.
In order to provide opportunities for people of all ages to receive arts education based on the objectives of activity, creation and presentation, programs built around cooperation between arts educators and artists are offered.
For 2020, the following three activities were programed.

- A campaign to make use of the social media by means of the #ArtsEdWeek hashtag to spread visual presentations on the present status of arts education online.
- Sharing of art works created by students and educators. This included virtual reality works displayed on the Internet.
- Professional training seminars for arts educators. 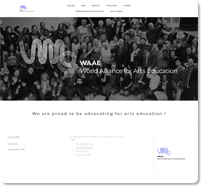