Based in Budapest, SÍN Culture Centre is a non-profit production house dedicated to discovering, training and supporting the creative activities of artists in Hungary’s contemporary performing arts. Having three studio facilities, the Centre supports a variety of artists, operates an artist in residence program and is active in an international arts network as it works to raise the level of Hungary’s contemporary performing arts and aims to increase awareness of them in Europe.

Support, Creation Programs
SÍN Culture Centre provides professional advice and training for young artists as well as offering management expertise and financial support for creation of works. Through its network of professionals, companies and arts organizations in Hungary and other countries, SÍN provides professional environments, resources as well as partners to help realize creative projects. Since 2014, the Centre has also recognized the growing need for social and community involvement, and thereby announced a support program for community theatre projects.
Artists in Residence Programs
The Centre also devotes itself to the support of creation in residence, and a tie-up with the Visegrad Fund a residency program is conducted with the aim of promoting exchange between the countries of the Czech Republic, Hungary, Slovakia and Poland. SÍN also conducts its own program TRACKS, which provides free studio space for 2-3 weeks to emerging artists who are primarily in the research and development phase of their work.
For the resident artists, the Centre encourages them to connect with the local artists in the framework of sharing information, technology and advice by organizing workshops and the like.
International Projects
SÍN is an active member in Open Latitudes, a network of nine arts organizations in Europe, and in the IETM international network , as well as engaging in joint productions through the One Land Many Faces project conducted by six countries in Europe with the aim of exploring European identity. Through these and other projects the Centre seeks to build an environment for contemporary performing arts that extends across national borders.
Rehearsal Studio Use
The Centre has three studios that are available not only for creation by the artists in residents but also for artists engaged in projects that include performance elements. Reservations for studio use begin from one-day reservations and are free of charge. 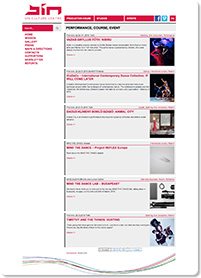