Kinosaki International Arts Center (KIAC) opened as an artist-in-residence base primarily for creators in the performing arts in April of 2014 in Toyooka City, Hyogo prefecture in the Kinosaki Onsen, a hot spring spa. Renovated from the former Kinosaki convention center with its large hall with a capacity for 1,000 and lodging facilities, the present KIAC facility has the main hall, six studios, and residences for up to 22 artists. Directly run by Toyooka City, the Center’s artistic director is the playwright and director Oriza Hirata. Artists can stay at the center for a maximum of three months, with no facility charges or accommodation fees to work on new creations of theater or dance. As such, it serves as an important base for international collaboration on new works.

The Artist-in-Residence program is for domestic and foreign artists and companies involved in the creation of contemporary works (shown to be viable) primarily in the performing arts that are selected on a open-call basis with applications accepted once or twice a year. The selection committee places priority on the applicants in the order of first their ability to create repercussions, their international appeal, their local relevance, their innovativeness and their future potential for their roughly 20 choices of artists for residencies each year. The selected artists can stay at the center for a minimum of three days and for a maximum of three months, and the KIAC facilities are available for their free use 24 hours a day all free of charge for the residences, hall, studios. During their residencies they also participate in the “Community Exchange Program” that, as a rule includes exchanges with the citizens of Kinosaki and tourists to offer them experience with the arts through free test performances, open rehearsals, workshops and talk events. has a 1000 capacity hall (27.5m ✕ 24m), six rehearsal studios, and seven guestrooms (for up to 28 guests). The facilities are available for 24 hours a day.

Also, in line with the KIAC policies, there is also an independent creation program that provides partial support for the production of about three creative projects a year. Works chosen for this program using local resources have included performance tours of collaborative works between KIAC residency artists and local artists, and one in which the theater company Niwa Gekidan Penino has worked with Kansai area actors and theater staff to restage works like Fortress of Smile .

A “Promotion and Personnel Resources Mentoring Program” is also conducted periodically. Among the Promotion programs is the KIAC Workshop Series held at welfare facilities in Toyooka/Kinosaki with focuses in areas such as nursing care and welfare/well being with the aim of connecting artistic activities to daily life and society, as well as music programs and community dance programs that anyone can participate in. The Personnel Resources Mentoring Program conducts an internship program for people like university students majoring in arts management and the like. 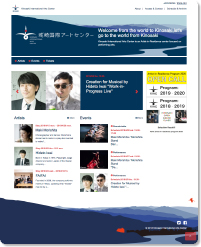