Performing Arts Alliance (PAA) first came into existence as the performing arts league, a collective effort of performing art groups to demand an exemption from sales tax on tickets and to abolish script censorship. After fulfilling its initial purpose, PAA turned its attention to the National Culture and Arts Foundation (NCAF), which signified a major shift in the subsidy and grant policy for arts and culture. PAA then committed itself to monitoring the subsidy/grant distribution and engaged in advocacy (defending rights and making policy recommendations) in the performing arts field. PAA’s programs include ones for cultivation of talented artists, holding events in cooperation with other arts organizations and networking. It has also worked actively as a think tank in efforts such as conducting surveys on Taiwan’s performing arts and maintaining a database on performing arts groups.

Cultural Forum
From 1999 to 2011, PAA invited professionals and related workers in the performing arts industry, the government agencies and the academy to meet on a regular basis. Notes were taken in these forums and written records were published in PAR (Performing Arts Review) in the hope of rendering insights to the present and the future of arts and culture in Taiwan.
Performing Arts Administration Training Program
Since 2008, PAA has been offering performing arts administration training. It is the goal of this training to cultivate professional and perceptive performing arts administrators. The program consists of courses designed to provide a comprehensive view on the management of the performing arts industry. Mentors give one to one sessions to help individuals overcome obstacles and gain perspective in theatre management. There are also general courses in performing arts, advanced courses and professional courses on various topics and aspects.
City-to-City Cultural Exchange Conference
In 1997, the City-to-City Cultural Exchange Conference was formed by the united efforts of the art circles in Hong Kong, Shanghai, Shenzhen, and Taipei. Since then, each year the cities took turns hosting the conference with a specific highlighted theme each time for the gathered cultural policy makers, front line cultural workers and the academia from all four cities. By holding the conference consistently, the hope is to form a functional network for cultural exchange between the major cities within the Asian area.
Taiwan Performing Arts Industry Survey
PAA launched a three-stage survey on the current status of the performing arts industry in Taiwan in 2004 commissioned by the Council for Cultural Affairs (now Ministry of Culture).
Database of Taiwanese Performing Arts Groups
Through collecting data on general information and recommended repertoires of performing arts groups in music, drama, dance and traditional arts as well as contemporary performance forms, the Database of Taiwanese Performing Arts Groups aims to serve as a platform for contacts and exchanges between international and Taiwanese performing arts groups. 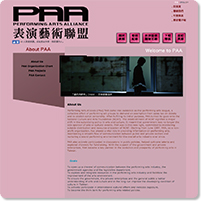