Established in 1956 by the last will and testament of Calouste Sarkis Gulbenkian (1869-1955), an Armenian-born oil baron and entrepreneur of British citizenship, the Foundation is one of the leading private foundations in Portugal. Gulbenkian is known as the first in the oil industry to export oil resources from the Middle East to Western Europe. Active internationally as a businessman, Gulbenkian moved his base of activities to Lisbon in 1942 during World War II.

Dedicated to the whole of humanity, the foundation’s original purpose focused on fostering knowledge and raising the quality of life of persons throughout the fields of the arts, science, charity and education. The foundation’s mission is to promote equal opportunity for all peoples and undertakes its activities structured around its headquarters in Lisbon (Portugal) and its delegations in Paris (France) and London (the United Kingdom), with support provided by Portugal in Portuguese-speaking African Countries (PALOP) and East Timor, as well as in countries with Armenian Communities.

Seeded by Gulbenkian’s personal collection of more than 6,400 works of art ranging from ancient art and craft works to masterpieces of Western painting and glass art by René Lalique, who was a personal acquaintance, the Calouste Gulbenkian Museum was built by the Foundation in1969 on the large grounds of the Calouste Gulbenkian park (now with an added wing for a growing collection of art by contemporary Portuguese artists).

In the park is also a concert hall, library and the Gulbenkian Institute of Science, and in addition there are the generously funded Gulbenkian Orchestra, the Lisbon Gulbenkian Choir and the Gulbenkian Ballet company. The Calouste Gulbenkian Foundation also grants individual scholarships, grants to organizations and supports pilot projects in various areas. For the five-year period from 2018 to 2022, priority support will be given for (1) Cohesion and Social Integration programs, (2) Sustainability programs and (3) Knowledge programs to advance individual skills. These three themes apply to all programs receiving Gulbenkian grants for research, support and creative worlds. 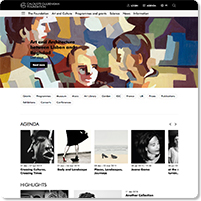