This contemporary art center in Warsaw is housed in the reconstructed Ujazdowski Castle, a historic castle originally built in the 13th century that has been destroyed and rebuilt numerous times. Preparations for the establishment were begun in 1981 by Poland’s communist regime at the time and the Ujazdowski Castle Centre for Contemporary Art opened in 1988 as Poland’s first large-scale contemporary art center. After the change of government in 1990, Wojciech Krukowski, the leader of the Warsaw theater company Akademię Ruchu, was appointed as director and has worked since to build a full-fledged program of arts activities at the Centre. With the ideal of bringing positive “critique” to Polish society, the Centre has initiated a variety of forward-looking programs. In 2003, a residency program was launched that accepts about 30 artists a year. Going beyond the traditional museum framework of collection, preservation and exhibition, the Centre has worked with artists to execute a variety of experimental new program plans that cross over the existing genres of art. In 2003, a residence program named “A-I-R Laboratory” was established, and today it welcomes about 30 artists a year. From 2010, Fabio Cavallucci took the post of director, and in 2014 he was succeeded by Malgorzata Ludwisiak.

Exhibitions and Performance-based Projects
In addition to exhibitions that introduce the latest trends in art, the Centre also plans exhibitions intended to provide opportunities for people to think about the current issues faced by Polish society. The “Project Room” program provides the opportunity for six young artists/groups to hold solo exhibitions each year, of which the leading two exhibitions as judged by an international jury are awarded prizes. Also, with the aim of introducing new forms of exhibitions, projects including elements like performance, interaction and movement are also undertaken.
Residence Program
Since 2003, the Centre also has a Residence Program that has welcomed a total of more than 200 artists, curators and researchers since its inception. For the artist program (3-month residencies), participants are chosen based on recommendations from a group of collaborating organizations based on a selected theme or subject. For the curator program (one-month residency), a group of four to seven participants and curator from the Centre engage in a workshop-style program with local artists solicited once a year via the website and Facebook page.
Cinema
The Cinema program gives showings of important works of all genres from theater films to art documentaries and animation, etc., which are not presented commercially. The introductions also include discussions with the filmmakers.
Educational Programs
A wide variety of programs are planned for all age groups, from infants to adults, and in both short-term and long-term time frames. The programs are designed to offer opportunities to encounter contemporary forms of artistic expression and to provide windows that inspire new interest in the world at large. Programs aimed at teachers are also provided.
Archive Access and Magazine Publication
Access is provided to the Centre for Contemporary Art’s archive, which is compiled as a record of contemporary art activities in Poland, and ongoing efforts are underway to digitalize its contents. The Centre also publishes its quarterly magazine Obieg presenting articles contributed by internationally active artists, curators and critics, and posts its contents for free viewing on the Web. 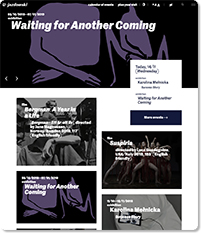