The organization’s activities include securing funding from the Australian Government, Corporations and private supporters and applying the expertise of the organization’s staff members to performing arts production efforts. As a producer, Performing Lines builds a cooperative network of domestic and international artists, venues, festivals, production partners and audiences and supports artists by supplying information and opportunities for creation of works. Also, in addition to full-scope co-production efforts that begin from the project planning stage and follow right through to national and international touring, the organization also provides professional consulting services to individual artists and organizations.

Performing Lines respects the indigenous culture of Australia and the rights of and responsibilities to its people in the contemporary world, and since its founding it has supported in particular the Aboriginal Theatre. The tour to Denver, Colorado of Robert Merritt’s The Cake Man to Denver organized in 1982 was the first production of Aboriginal theater ever to tour abroad.

On the Performing Lines website you will find information including resumes and lists of works of artists the organization is currently involved with through co-production, creative work and performances. 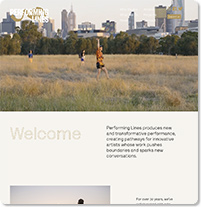