In Europe, the cultural and creative sectors play an important economic role. Urban Heat is a project made possible through funding from Creative Europe, the European Union’s program to protect diversity and stimulate creativity. It was launched as a four-year project in 2015 with the aim of supporting artists to develop and create daring and extraordinary work that connects with the world outside the arts by addressing urgent political and social issues rooted in the urban environment. The project is operated by a network of 12 European festivals in 11 countries (the project’s office is set up in the offices of London’s LIFT festival).

As of 2017, Urban Heat is supporting the creative activities of 22 artists (in performance, theater, dance and crossover genres) aimed at evoking change and supporting sustainability in the cities. Also, through a series of Academies and City Labs, which bring together artists, academics, faith leaders, political scientists and technologists, Urban Heat enables artists to develop their understanding of fundamental issues and challenges facing cities.
Among the artists Urban Heat supports, at least one artist a year will receive support for the joint production with participating festivals of a new work to be performed. The close exchanges and dialogue that occurs between these artists and the festivals also helps shed new light on the pressing issues the local communities face. 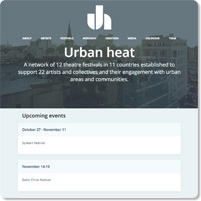