This large foundation was established in 1975 in accordance with the last wish of Aristotle Onassis, known as one of the 20th century’s predominant shipping tycoons, based upon an inheritance that would have gone to his son Alexander who met with a fatal plane crash prior to Aristotle’s death. Among one of Europe’s largest privately funded foundations, its ample funds permit the foundation to engage in a wide range of activities, allowing it to establish scholarships (for Greeks and foreigners alike), as well as funding several International Prizes (in the areas of Law and Humanities; Shipping, Trade and Finance; and immigrant human rights) one after another. A large-scale project representative of the foundation’s activities is the Onassis Cardiac Surgery Centre, created in central Athens in 1992 on a budget of 75 million USD (approx. 8,300 million Yen). Upon completion the facility was donated to the Greek state and has since been run as a national medical institution.

The Foundation’s main objective is the promotion of Hellenistic/Greek culture and civilization worldwide. In order to meet this end on a broader scale, the New York branch of the Onassis Foundation was established in 1999. From this office, activities for the encouragement of studies on Hellenic civilization are promoted in North and South America. As part of these activities, the organization founded the Onassis Library, concerned with Hellenistic and Roman art, at New York’s Metropolitan Museum of Art. The foundation has also sponsored renovations of the National Archaeological Museum of Athens, the Byzantine and Christian Museum and the Benaki Museum, and is involved with countless other artistic and cultural projects.

The Foundation opened the Onassis Cultural Centre-Athens in 2010, which aids efforts in the areas of international collaboration, nurturing young local artists, the promotion of lifelong education, as well as projects in the areas of science, development and art. With a main hall seating 800, a small hall (200 seats), an exhibition hall (600m2), outdoor theater, etc., the Center hosts an array of programs throughout the year including musical recitals, art exhibitions, theatrical and dances performances, and education programs. The Centre also serves as the main venue for the “Fast Forward Festival,” programmed by Katia Arfara, Artistic Director of Theatre & Dance at the Onassis Cultural Centre-Athens. 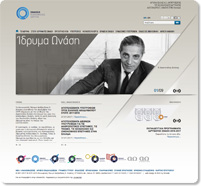