The Sidney Myer Fund and the Myer Foundation are private philanthropic organizations committed to support of programs for the arts and humanities, education, alleviating poverty and supporting the disadvantaged and the environment and sustainability. Australian Sidney Myer, born Jewish under Imperial Russian rule in Belarus, relocated to Melbourne to escape persecution, and there made his fortune, becoming a philanthropist deeply involved in the wellbeing of his community. A committed advocate of the arts, he founded the Sidney Myer Foundation in 1934 as a means to continue to contribute to the advancement of arts and culture in Australia. His sons in 1952 founded the Myer Fund to further contribute to collaborative international projects, science and technology and the environment. The philanthropies are managed by a single team which in 2016 donated a total of 13,574,404 AUD. Largest by category of the recipients fall under the arts and humanities, and in 2015 this category received 34% of all donations. Included below is a list of the chief grants offered by the Sidney Myer Foundation.

The Sidney Myer Creative Fellowships
While artists are the driving creative force behind the art community, their pay is too often insufficient to amount to a livelihood. The Sidney Myer Foundation views this as a problem and seeks to remedy it. The Fellowship’s aim is to support artists through the critical stages of their careers in order to help them make their way as professionals. Intended for artists, writers, etc., the Fellowship is not contingent on any results and is unrestricted in how the grants are spent. Prospective recipients are between seven and 15 years into their careers, with outstanding talent and exceptional courage; Australian or permanent residents of Australia; and can have a range of backgrounds including artists, art managers and thought leaders in the humanities. There are approximately eight recipients each year receiving the grant, which totals 160,000 AUD (tax-free) over a two-year period. Recipients, to date, include artist Vernon Ah Kee (2014), writer/playwright Courtney Collins (2015), and Alex Kelly (2015), who takes on various roles in community art including production and direction.
Capacity Building Stream
This grant program open to applications from the general public, selects projects in the fields of education, alleviating poverty and aiding the disadvantaged and the environment in addition to the arts and humanities. In the arts and humanities, grants are given to artist groups and ensembles that create outstanding work through networking with other organizations, with the ultimate aim of strengthening extant independent artistic and cultural groups in Australia, and helping to support emergent ones, focusing chiefly on small- to mid-sized organizations. Applications are accepted from specific regions which change yearly: organizations based in the states of Victoria and Tasmania were the target for 2015, and South Australia for 2016. Funding lies between 20,000 and 50,000 AUD per organization, split into payments over two years. The grant has supported such organizations as the Polyglot Theatre, which gives interactive and participation-type performances led by children, and All the Queens Men, known for their spectacular large-scale performances in conjunction with communities from diverse cultural backgrounds.
Sidney Myer Performing Arts Award
This arts award created in memory of Sidney Myers, began in the 50th year since his passing, 1984. The Award’s aims are to recognize achievements in dance, drama, comedy, music, opera, circus and puppetry, and to contribute to the advancement of the performing arts in Australia, giving individual (60,000 AUD), group (90,000 AUD) and facilitator (25,000 AUD) prizes. Past recipients include the circus act Circus Oz (Group Award, 1984), singer/actress Ursla Yovich (Individual Award) and musician and educator Mandawuy Yunupingu (Facilitator’s Prize, 2009).

The Award’s other activities includes an annual contribution of 2 million AUD to the Performing Arts Triennale, which the Sidney Myer foundation began as the first of such events in the Asia-pacific region in conjunction with Arts Centre Melbourne in 2015-16. 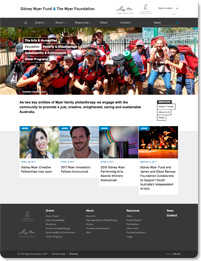