The Baring Foundation is an independent foundation established in 1969 by the Baring Bank, a London bank that dated back to the 18th century (the bank went out of business in 1995). The Foundation’s mission is to use the power of the independent and effective civil society both nationally and internationally to improve the quality of life of people experiencing disadvantage and discrimination. It gives grants in three main fields, the arts, international development and for the strengthening of volunteer organizations. In 2015, a total of £1,139,006 was given in grants to 31 programs. Among these, grants given for the arts totalled £312,688 for 15 programs.

A defining feature of the Foundation is its focus on projects involving arts and the elderly. Social concern over the isolation of older people exists in the United Kingdom as it does elsewhere, and whereas it was known that participation in the arts declined after age 60, few funding programs were available to projects that sought to bring together the arts and older people. In 2009 the Baring Foundation published “Ageing Artfully: Older People and Professional Participatory Arts in the UK,” a report detailing 120 case studies and identifying 13 areas worthy of consideration. Then, in 2010, the Baring Foundation went on to establish a new grant program for participatory art projects aimed at elderly people open to the general public with the objective of improving both the quality and quantity of art available for older people. Selected projects included dance, as a preventative of various conditions including those degenerative conditions the cardiovascular system, and choir projects aimed to nurture fellowship and stave off onset of dementia. The Foundation further began open-application grants in 2012 for partnerships between art organizations and care-givers, with the intention of improving the quality of life for those in the service of care-giving, but also to improve employee satisfaction, lowering rates of absences and resignations. An initiative was started in 2014 to help fund commissions for exceptional professional artists over the age of 70, with a total of £239,500 given for 11 art works in areas including dance, digital art, sculpture, music, theater and poetry. The emphasis on grants for participatory projects for the elderly is set to continue until 2019.

The Baring Foundation is also defined by giving grants in conjunction with all four of the UK’s Arts Councils, beginning in 2011, with Scotland. Such joint funding allows for both providing maximum support through a larger grant, and contributes to the ability of local communities to establish and promote arts programs and initiatives involving older people. As an example, the Foundation’s collaboration with Creative Scotland was able to provide a large venue for the Luminate festival, a festival with programs for older people held each year in October. With Arts Council Wales, the Foundation helped fund workshops to help artists create audience-participatory type works for the elderly and, for employees of welfare facilities for the elderly, training in how to use arts in the workplace.

In other areas, the Baring Foundation, in collaboration with galleries and museums in the UK, maintains a network of museums committed to accommodating the elderly. The Baring Foundation has also created a manual for operating cultural facilities that are considerate of those with dementia, under a government initiative. 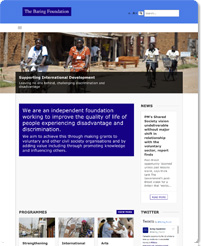