EGEAC (Empresa de Gestão de Equipamentos e Animação Cultural de Lisboa) is a municipal public company responsible for managing various cultural facilities and public spaces Portugal’s capital of Lisbon and for establishing and promoting a wide variety of cultural events and activities for all of the civic communities of Lisbon with the aim of acting as a catalyst for the development of cultural industry and using the arts and culture to enhance dialogue between the city and its local, national and international public.

EGEAC’s predecessor is EBAHL – (Equipamentos dos Bairros Históricos de Lisboa, E.P.), a public company established in 1995 by the Lisbon municipal government with the main aims of renovating the city’s historical quarters, which are designated as a UNESCO World Heritage site, and developing projects and cultural facilities. From 1996, EBAHL took over the management of the Lisbon Festival in order to further develop this comprehensive arts festival that had been held in the city’s historical quarters since 1932 with recognition of the fact that “the ephemeral nature of the [festival’s] parades should put down roots for the future” as part of a cultural industry that would benefit the entire city. In 2003, EBAHL was reorganized as EGEAC to extend its administrative realm from the historical quarters to include the entire municipality of Lisbon. Since then, its mission has been the promotion of the arts and culture throughout the city of Lisbon. 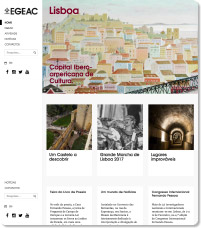