This large charitable organization is run by Sime Darby, a multinational corporation with heavy involvement in such fields as forestry, real estate, manufacturing and energy. Yayasan Sime Darby (YSD) gives their support to activities in the five areas of education, the environment, community and health, youth and sports, and the arts and culture. The organization celebrated its 30th anniversary in 2012, and all of its activities are guided by a motto of “creating effects and changes that are sustainable to the lives of community members.” In the field of education, over 2,500 students showing academic promise and leadership qualities have been awarded YSD scholarships. These scholarships have not been confined to Malaysian nationals, but have been awarded in countries with Sime Darby offices, including Indonesia, Liberia and Papua New Guinea.

In arts and culture, candidate projects are those that emphasize multiculturalism and multinationalism, and especially the performing arts with local roots and which seek to be internationally exposed, and those that are a part of Malaysia’s rich cultural heritage, whose preservation the organization has prioritized. YSD’s agenda for 2016 has included organizing the Johor Bahru Art Festival, a national tour by the ASWARA (National Arts Culture And Heritage Academy), and support for dance performances of Mavin Khoo, an internationally celebrated dancer of Bharata Natyam (a traditional dance from southern India).

YSD has launched the “Yayasan Sime Darby Arts Festival” since 2014, adopting the Kuala Lumpur Performing Arts Centre (klpac) as its main venue. From traditional dance to contemporary dance, and from traditional to experimental theater, over 350 events were presented, drawing a total audience of 15,000. Further upping the scale of the festival in 2016, programs for children were reinforced, along with the visual arts, music and Pentas Wayang (traditional shadow theater). Entitled “Walk to the Future,” a fashion parade was also organized on the first day of the festival, featuring futuristic fashion produced by fashion design students. 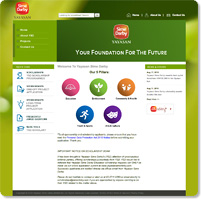