This charitable cultural organization was founded in 2005 by Helen Marriage and Nicky Webb, co-founders of the Ageas Salisbury International Arts Festival, and specializes in the organization and financing of large-scale outdoor performances. The organization has been keen on supporting artists presenting high quality performances to largest-scale audiences. The organization has been guided by the idea that art should not "take place only behind the closed doors of theatres or art galleries...[but instead] in unusual places: in the streets, public spaces or in the countryside." True to their belief in "art for all people" since the first project they took on in 2006, most of the Trust’s productions have been presented free of charge. Artichoke Trust first won international renown with the first performance of the French giant marionette theater company Royal de Luxe in London. For this performance titled The Sultan’s Elephant and featuring an 11.2 meter mechanical elephant, some eight kilometers of London streets were blocked off and outdoor performance was staged at public venues including Trafalgar Square, St. James Park and Haymarket. According to the BBC, this performance was seen by over one million people.

In addition, in 2009 the organization was the first to host in Britain a White Night (Nuit Blanche) festival, which are held in various places throughout Europe. Entitled Lumiere , the event was among the largest light festivals in Britain and was held in such cities as Durham (2009-2013), Delhi (2013), and London (2016). In 2013 at Durham, Lumiere gathered public attention for having a total economic effect of 5.8£ million. The event was held on a large scale, with the support of such organizations as Atom Bank, Bloomberg, Heart of London Business Alliance, London & Partners, the district of King\'s Cross and the Westminster City Council. The total draw was over one million people.

While most of the funding for their projects comes from the Arts Council England and corporate sponsors, the donation-based Artichoke Hearts initiative also brings in private donations to support their activities. These donations begin at 3.5£ per month, and donors can support the activities of the Artichoke Trust through their website. 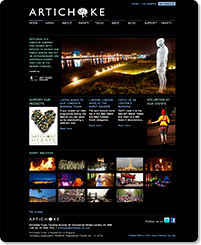