American Dance Abroad is a national organization specializing in the support of contemporary dance artists and companies in the United States. The organization was founded by Andrea Snyder, who gained experience as a producer and director under choreographers Merce Cunningham and Laura Dean and became a leading producer in the American contemporary dance world, and Carolelinda Dickey, the former producer for the Bill T. Jones/Arnie Zane Dance Company and now serves as co-artistic director for the International Tanzmesse NRW in Düsseldorf, Germany.

Together, the two authored and published the book “Dance America: An International Strategy for American Dance. Research for this book had revealed to them the issues involving the grant system for contemporary dance in America as well as the environment regarding networking and education, etc., and led them to establish American Dance Abroad in 2011 as a means to remedy the pressing issues in the U.S. dance environment. Taking a long-term perspective, the organization now provides various types of support aimed primarily at expanding international visibility of American contemporary dance works and creating paths for choreographers to engage in cultural exchange with their international counterparts.

The organization has four main support programs. The American Corner program that assists artistic directors, choreographers, administrators, and artist representatives/agents with access to marketplaces, international festivals, conferences, or other platforms for networking to show the present state of the American dance world. The Rapid Response program is a travel subsidy program to assist American dance companies and artists who receive invitations to perform, teach, or conduct creative research outside of the United States. The Beyond Our Borders program is a training and mentoring project for New York City-based dance companies. American Dance Abroad also periodically hosts American Dance Recon , a five-day intensive symposium that brings international programmers to a U.S. city with a strong and vibrant dance scene. 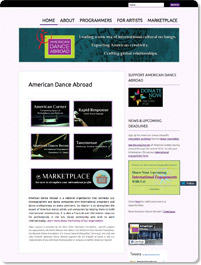