The playwrights having received support from PF until now include Sam Shepard, who won the Pulitzer Prize for his drama Buried Child. In fact, after getting to know Shepard through the Foundation, Woodruff directed the US premieres of a number of Shepard’s plays, including Buried Child , Curse of the Starving Class and True West . More than 80% of the artists that PF has supported have received subsequent productions of their work, including two opening on Broadway.

Since its inception, PF has served nearly 500 writers at all levels of their careers, providing indispensable resources and support to develop their work, learn new skills, forge connections with producers, and engage audiences with their work.

PF’s program alumni include Chinese-American playwright David Henry Hwang, known for his play M. Butterfly , actress Anna Deavere Smith, who appeared in the NBC drama The White House , the Japanese-American writer Philip Kan Gotanda, whose works like The Wash and Sisters Matsumoto have been performed in translation in Japan as well, the African-American playwright and poet Marcus Gardley, whose work The Gospel of Lovingkindness won the Best Play and Best Playwright awards of the 2014 BTAA awards, and the Cuban-American writer Nilo Cruz, who won the 2003 Pulitzer Prize for his work Anna in the Tropics , to name a few.

Among PF’s main programs are the Producing Partners Initiative that serves as a platform for networking, the Rough Readings Series for reading scripts on progress, the Resident Playwrights Initiative that provides time and space for young playwrights to write, and others.

In 1976, Playwrights Foundation initiated the Bay Area Playwrights Festival (BAPF) to create a venue for young playwrights to experiment with new ideas and have their works performed. The BAPF has offered opportunities to over 300 contemporary playwrights to date. 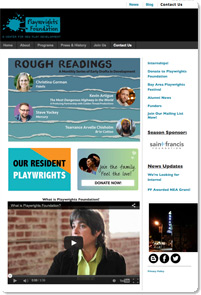