The Arts and Theatre Institute (ATI) is a state-funded intermediary support organization founded by the Ministry of Culture of the Czech Republic. It was originally founded as the Theatre Institute in 1959, and in 2007 the institute changed its name to the Arts and Theatre Institute (ATI). Its mission is mainly to provide a comprehensive range of services in the field of Czech theatre, including collecting objects and work relating to the theatre, such as books, costumes and art, which are processed as archives to which public access is provided. ATI also publishes scholarly work, pursues research and initiates and participates in international projects. In recent years it also provides services connected to other branches of the arts, including music, literature, dance and visual arts. ATI also functions as the headquarters of the Czech Office of the EU Culture Programme and as the administrative office for the Prague Quadrennial (PQ) stage art exhibition held once every four years.

The Theatre Institute (TI) of ATI is a center composed of departments providing a broad range of services including a library, bibliography, documentation, video library, web portals, and databases, as well as a publishing department, through which it promotes and presents Czech theatre at home and abroad by providing information, advice, education, production, and publishing for the field of theatre. ATI has one of the largest theatre libraries in Europe and large online databases that anyone can access ( http://www.idu.cz/en/virtual-research-room ). Especially treasured by many researchers of Czech theatre is the theatre.cz ( www.theatre.cz ) website where anyone can read in English about the latest developments in Czech theatre. ATI’s Arts Institute (AI) is a separate department of the Theatre Institute dealing with the arts other than theatre, including music, dance and literature, while also conducting a residency program, supporting the exchange of information and experience between artistic fields, pursuing educational activities and presents and promotes Czech art abroad, all with the mission of advancing and elevating the social prestige of art in the Czech Republic.

Since 2013, the “European Theatre Night” programme held at numerous places around Europe with the aim of elevating the social status of theatre was held in the Czech Republic for the first time through a tie-up with ATI. This event, which offered a free night of theater citizens at 80 theatres in 25 cities in the Bohemia and Moravia regions attracted a total audience of 40,000. In its third holding last year, 120 theaters participated and a total audience of 50,000 attended. 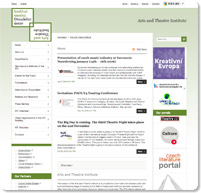