Five Arts Centre is a cooperative organization founded by independent artists and producers in 1984 with the aim of providing opportunities and places for creative activities and performances of the theater that has been fostered in Malaysia and the fruits of unique Malaysian creativity. The joint founders were director Chin San Sooi, fellow director and Dean of the department of performing arts at the national Arts Academy at the time of the founding, Krishen Jit and the choreographer and dancer Marion D’Cruz . From the time of the organization’s founding, it concentrated efforts on fostering the creativity springing from varied identities of Malaysia’s multicultural society and the creativity of the local communities.

In 2006, the Centre joined with the Malaysian satellite television broadcasting company Astro to form the Krishen Jit ASTRO Fund. The Fund provides economic support for artists living and active in Malaysia as well as people contributing to the development of Malaysian arts and culture. 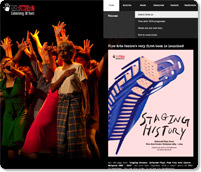