The International Visegrad Fund was established in 2000 for the purpose of promoting cooperation between the four countries of Central Europe known as the Visegrad countries (the Czech Republic, Hungary, Poland and Slovakia, commonly referred to as “V4”) in the arts/culture, science and research, education, tourism and other areas. Among the Fund’s main programs are project grants and scholarships for foreign students.

The purpose of the Fund’s grant programs facilitate and promote the development of understanding and closer cooperation among citizens and institutions in the V4 region through multinational research and projects as well as between the V4 region and other countries, especially in the Western Balkan and Eastern Partnership regions. In 2011, the “Visegrad 4 Eastern Partnership” program was launched to expand its activities beyond the V4 countries to include the Eastern European countries and former Soviet Union countries (Armenia, Azerbaijan, Belarus, Georgia, Moldova and the Ukraine) to support projects contributing to the democratization and transformation process of the region. In 2012, the “Visegrad +” program was launched to target the Western Balkan countries (Albania, Bosnia Herzegovina , Macedonia, Montenegro, Serbia and Kosova), which also supports projects that contribute to the democratization and transformation process of that region.

The Fund’s annual budget is about eight million euros. The V4 countries each contribute roughly the same amount to financing the Fund. The Fund also utilizes (in the form of sub-granting or co-financing) contributions from other governments/governmental organizations from the following countries: Canada, Germany, the Netherlands, South Korea, Sweden, Switzerland and the United States. The grants are open to not only people living in the V4 countries but also organizations and individuals undertaking projects in tie-ups with the V4 region and any other parties.

In recent years the Fund has been supporting joint projects with Japan as well. Named the “V4-Japan Joint Research Program,” this program supports concrete research projects carried out on multilateral basis between the V4 region and Japan with the cooperation of the Japan Science and Technology Agency. Also, in the area of the performing arts, there is a program named “Keep PACE with Japan” that exports contemporary performing arts from the V4 countries to Japan. This program resulted in invited performance by Farm in the Cave and the Berg Orchestra on the main program of the TPAM arts market in Japan in February of 2015. 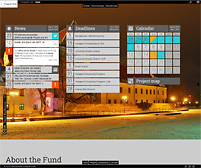