European Network of Information Centres for Performing Arts was established in 1999 as a network of specialists from Europe in the field of performing arts information, documentation and collections based in Brussels. The aim of the network is to train these professionals by sharing expertise and knowledge. The member organizations meet once a year to exchange information about working visions, ideas and information technology and launch projects to get out the latest information about trends in the performing arts primarily for the European region.

Among ENICPA projects for disseminating information is Performing Arts Central Europe – Visegrad Countries Focus (PACE.V4), which has been active since 2013. The aim of this project is to get out information about the latest trends in contemporary theater, contemporary music and contemporary dance in the four Visegrad countries (Czech Rep., Slovakia, Poland and Hungary), which recently led to a trip by artists from these four countries to Japan in February of 2015 to give presentations at TPAM under the title “Keep PACE with Japan.”

ENICPA is also increasingly involved in the digitalization of information for dissemination and archiving, and from the Databases pages of the ENICPA website you can download webzines about major festivals and performing arts companies in countries like Poland, the Czech Republic and Finland, among others. 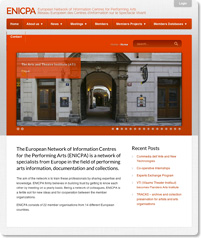