The Open Network for Performing Arts Management (ON-PAM) is a membership-type network of performance arts makers and producers established in 2013, which is dedicated to connecting artists/artistic groups and the audiences. With offices in Tokyo’s Japan Center, Asia Basin Arts Communication (PARC) , it currently has approximately 150 member organizations and individuals active around Japan, including public and private-sector theaters, production companies and related professionals, free-lance producers and others. Plans call for ON-PAM to officially receive status as a non-profit organization (NPO). The President is Yusuke Hashimoto, who serves as the program director of the Kyoto Experiment project.

ON-PAM is organized and functions as an “open network” and, unlike an association or a project consortium, it connects all the members horizontally without any hierarchy. The members are divided into three committees, the Committee on Cultural Policy, the Committee on International Exchange and the Committee on Community-based Co-working, which conduct committee activities and/or symposiums open to the general public two to four times a year.

As a sub-network, ON-PAM also promotes the Asia Producer Platform (APP) made up of performing arts producers from Australia, Japan, Korea Republic and Taiwan. In 2014, five young and mid-career producers participated in a joint camp in the Korea Republic.

A number of programs proposed by the members are organized from time to time in various places and on varying scales. In regions around Japan, local producers are gathered for meetings to share information and engage in networking. 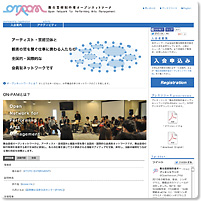