In line with amendments to the Tokyo Metropolitan government’s directives for the promotion of culture, the “Tokyo Council for the Arts” was established in 2006 as an agency under the jurisdiction of the Governor’s Office. Based on a proposal by this agency, the Arts Council Tokyo was established within the Tokyo Metropolitan Foundation for History and Culture (*) in November of 2012 as Japan’s first full-fledged organization following the internationally acknowledged template of an “arts council,” with the aim of developing and promoting arts and culture.

The objectives of Arts Council Tokyo are (1) the promotion of artistic and cultural creative endeavors and the further development of Tokyo’s cultural appeal, (2) to promote wide-ranging and original creative endeavors worthy of Tokyo’s status as an international city, and to contribute to the forging of a regional community steeped in creativity and interaction and (3) to advance initiatives for artistic and cultural innovation from a studied and long-term standpoint, while at the same time honoring the autonomy and originality of culture and the arts. Under the direction of the Director General the organization consists of one program director, nine program officers and two administration staff. The Council makes decisions concerning the budgeting of funding from the Tokyo Metropolitan Government in three main areas including primarily grants to programs for arts and cultural activities (Arts Council Tokyo Grant Program), the Pilot Program and Planned Strategic Programs.

The Arts Council Tokyo Grant Program subsidizes organizations with plans and projects, designed to promote creative activities that broadcast the fascinating art and culture of Tokyo to the world. There are two types of grants: single-year grants and long-term grants of up to three years. This grant program is open to projects to be executed either in the Tokyo metropolitan area or overseas, involving performances, exhibitions and other art projects with strong communicative value, programs that will be valuable for improving the environment for creative art activities and activities to promote education. Projects for the in the Tokyo metropolitan area are eligible for grants of up to two million yen and projects for overseas activities or collaborative work with overseas artists are eligible for grants of up to four million yen (up to one half of the total cost of the project). Applications are accepted twice a year. In 2013 a total of around 120 million yen in grants were given for 83 projects.

The Pilot Program includes human resources cultivation projects, and pioneering programs implemented in coordination with the tourist industry and community revitalization efforts. It aims to foster young creators and researchers by providing support through the Arts Academy program entrusted to the survey committee of the Arts Council Tokyo Grant Program for the purpose of human resources development, Creative Industry Support Programs that aid creative industries, such as those that cultivate human resources for the animation industry, etc., projects that aim to bring vitality to riverside areas particularly along the Sumida River in the Sumida River Renaissance-related Programs and the Showcase of Traditional Performing Arts that aims to convey the fascination of traditional Japanese performing arts as a resource for the tourist industry.

The Planned Strategic Programs are intended to improve artistic and cultural environments and strengthen think-tank-oriented capabilities through a wide range of research studies and creation of overseas networks, etc. With the choice of Tokyo as the host for the 2020 Summer Olympic and Paralympic Games, the Arts Council Tokyo plans to take an active part in related cultural programs.


*The Tokyo Metropolitan Foundation for History and Culture: Entrusted with the management of 12 municipal museums and concert halls, etc., this is a public interest foundation is dedicated to the promotion of arts and culture projects that disseminate Tokyo culture. 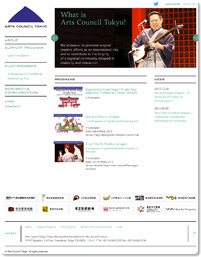