Kakiseni is a non-profit performing arts platform in Malaysia. The organization’s name Kakiseni is wordplay, combining the Malay words kaki (foot) and seni (art) to mean “really into the arts.” The Kakiseni website was originally launched by Jenny Daneels and Kathy Rowland in 2001. Initially it was intended as a portal website where artists and arts professionals could exchange information about things like performances and audition information and post interviews, reviews and compile a database in artists, directors and producers, etc. In 2002, Kakiseni launched Malaysia’s first performing arts award program, the Boh Cameronian Arts Awards.

Then in 2009, Kakiseni was re-launched with Ms. Low Ngai Yuen as its second director. This led to an expansion of Kakiseni programs beginning in 2011 with “Women: 100,” and event that had 100 hours of performing arts in theatre, dance and other genres all focused on women. That same year also saw the start of the Kakiseni Arts Exchange program that invites foreign directors to Malaysia to create works with Malaysian artists. Then, 2013 marked the start of the KakiSENI Festival that presents a program of 30-minute performances from Malaysia and abroad in a temporary theatre facility set up in a large-scale shopping mall in the capital of Kuala Lumpur. In collaboration with the government, a comprehensive scheme of public funding for the performing arts in Malaysia was also established in 2011 as the Kakiseni Grants program with a budget of approximately 4.4 million ringgit (approx. 1.3 million US dollars) to provide support for artists in a wide range of activities.

The following are the main programs Kakiseni conducts currently.

Portal website operation   http://kakiseni.com/   http://blog.kakiseni.com/
Since 2001. Currently, the site’s main functions are its listings of performances and a ticket purchasing system provided free of charge. Operating separately is the Kakiseni Blog that provides up-to-date information regarding the local arts scene, such as show reviews and interviews of prominent figures in the arts world.

Boh Cameronian Arts Awards   http://awards.kakiseni.com/
Since 2002. Each year awards are given to outstanding performing arts in the four divisions of Music, Musicals, Dance and Theater with awards for each division given in eleven categories, including Best Director、Best Solo/Leading Role Performer、Best Original Script、Best Lighting Design、Best Music & Sound Design、Best Set Design、Best Performance by an Ensemble/Group, etc.

Kakiseni Grants   http://grants.kakiseni.com/
Since 2011. About 60 grants are given each year in the following five categories.
1. Reduce Production Costs grants: given as support of renting theatre/studio spaces and equipment rental
2. Mentor-mentee Programme grants: providing funding for experienced mentors to support the young artists’ new productions
3. Arts in the Community grants: community outreach grants to support artists’ activities
4. Apprentice Programme grants: to support young people working in the performing arts industry
5. New Malaysian Works grants: providing support for the writing on new plays and bringing them to the stage.

Kakiseni Arts Exchange   http://aex.kakiseni.com/
Since 2012. Conducted under a different scheme each year, this exchange program invites directors from abroad to team with experienced Malaysian artists and create works, etc., with young artists who apply for the program.

KakiSENI Festival   http://festival.kakiseni.com/
Since 2013. Staged in a shopping mall in the capital of Kuala Lumpur, the festival presents a program of 30-minute performances of works from Malaysia and abroad in a temporary theatre facility, music performances at an outdoor stage, and public art installations. 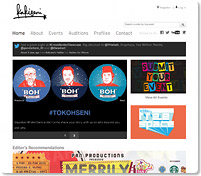