Kulturstiftung des Bundes (the German Federal Culture Foundation) is a foundation dedicated to promoting and funding arts and culture that was established in 2002 by the German federal government. Its headquarters are in Halle an der Saale, Germany. Differing from the arts and culture foundations in the various states of Germany, the Federal Culture Foundation has a central emphasis on the promotion of innovative programs and projects in an international context. Furthermore, the Foundation also invests in projects which develop new methods of fostering cultural heritage and tapping into the cultural and artistic potential of knowledge required for addressing social issues, as well as focusing on cultural exchange and cross-border cooperation by initiating projects of its own.

The annual budget of the Foundation is currently 35 million euros. In addition to its comprehensive support for top-level domestic projects, since 2004 support is also being given to five German Cultural Promotion Funds (the Arts Fund Foundation, the Performing Arts Fund, the German Literature Fund, the German Translator Fund and the Socio-Cultural Fund).

The support programs are divided into two categories, General Funding and Funding in specific artistic fields. General Project Funding is given to organizations inside and outside of Germany undertaking large projects with an international scope that require at least 50,000 euros in budget. Funding for specific artistic fields is given for dance, theatre, literature, fine arts and socio-cultural projects, and there are also funds for artistic cooperation between Germany and African countries, for cooperation between theaters and funding for overseas researchers and curators.

Among the international programs and projects in Germany that the Foundation has supported until now are the Documenta international contemporary art exhibition held once every five years in Kassel, the Berlin Biennale, the Theatertreffen international theater meeting (festival), Tanzkongress (Dance Congress) festival held once every three years, the annual transmediale festival for media art, the Donaueschingen Festival, known as a gateway to success for emerging composers and the Politische Romantik literature conference held in Frankfurt.

The Foundation also publishes its annual free magazine Das Magazin as an information source that introduces the programs it supports. Back issues of the magazine can be viewed on the Foundation’s website (German only). 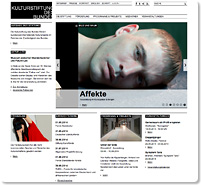