New York Live Arts (NYLA) is a dance-specific arts organization based in the downtown area of Manhattan, New York City. Dance Theater Workshop (DTW), which had been a leading force in the New York dance community, nurturing many of the leading American choreographers in the four and a half decades since its 1965 launch, merged with the Bill T. Jones/Arnie Zane Dance Company to form the new organization in 2011.

The forerunning DTW became known as a service organization established by an artist collective (Art Bauman, Jeff Duncan, Jack Moore) that ran an experimental small theater in the Chelsea district of NYC and provided innovative forms of support for artists. From 1975 to 2003, under the leadership of David R. White, DTW supported artists by commissioning new works, funding international research and travel expenses, providing studio space and support for performance tours, while also establishing the U.S. nationwide presenter network National Performance Network (NPN) in 1984 (which became independent in 1998). All this made a big contribution to the development of contemporary dance.

In 2002 the facility underwent major renovations and reopened as a 21,860㎡ self-owned building with a 184-seat theater, two studios and meeting rooms. In a move to secure a more stable long-term financial base, DTW merged with the Bill T. Jones/Arnie Zane Dance Company, which in its 30th year was looking for a more permanent base of activities.

At New York Live Arts, Bill T. Jones serves as Executive Artistic Director and DTW’s Carla Peterson is Artistic Director while the Bill T. Jones/Arnie Zane Dance Company’s Jean Davidson serves as Chief Executive Officer. Drawing on combined knowledge and expertise of the two organizations, New York Live Arts continues the broad-based artist support programs pursued by DTW divided into three basic areas defined by the key words “create,” “engage” and “present.” Newly launched in 2011 is the Resident Commissioned Artist designed to provide comprehensive support for the activities of mid-career professional artists, and from 2013 the “Live Ideas” festival has been launched on an annual basis with a focus on explorations of the interplay of creative expression and the world of ideas. As a destination for innovative movement-based artistry offering audiences access to art and artists notable for their conceptual rigor, formal experimentation and active engagement with the social, political and cultural currents of our times, the organization engages conducts programs in a wide range of genre for the purpose of supporting artist development on an ongoing basis. The influence of New York Live Arts also extends beyond NYC through its international cultural exchange program that currently places artists in Eastern Europe, the Middle East and Africa.

As of 2013, main programs include the following: 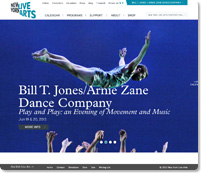