Based on the campus of the University of Leuven (KU Leuven), STUK is one of Belgium’s leading arts support NPOs. Its predecessor was “’t Stuc,” a student organization founded in the latter half of the 1970s to run an arts center. In 2001, it merged with the international contemporary dance festival KLAPSTUK to form a new organization named STUK.

In 2002, after major renovation of its current building accomplished with the support of the Flemish Community, the city of Leuven and K.U. Leuven, STUK opened as a well-equipped comprehensive arts center where residencies and other programs are now held. The University turned the building over to STUK on a 50-year leasehold contract and an agreement to share the building with K.U. Leuven Culture Office and student organizations and manage it as an art center complete with theater, rehearsal studios, movie theater, lecture hall, music rooms, darkrooms and a café.

STUK provides spaces, opportunities and funding support for multi-disciplinary artistic creation and presentation for domestic and international artists involved in development-oriented, innovative art, while also making long-term commitments to artists and collaborative projects. In the field of dance, there are activities year-round by internationally renowned artists such as Rosas, Jerome Bell and Meg Stuart as well as young artists. In addition to central programs in theater, dance and film, recent years have seen increasing multi-disciplinary programs spanning music, visual arts and media arts.

The residency program provides creation spaces and apartments for artists working in a broad range of disciplines. The number of artists in residence changes every year and the residency lengths are flexible, ranging from a few days to stays of about two months. Here are also arrangements that provide support over multiple-year terms. Residencies are not limited to European artists, with many coming from the Americas and Asia as well. Most of the artists in the residency program are involved in creating works in the art center’s facilities.

Since 2006, there are two international festivals serving as outlets for STUK activities. One is the art and media festival launched in 2006 named the Artefact Festival ( http://www.artefact-festival.be/ language/ en ) that presents richly varied programs of installations, performances, symposiums, concerts and exhibitions organized around themes such as art development in new media and how the fields of science and urban architecture and development are influencing the arts. The second festival, launched on 2007, is called Playground ( http://www. playground festival. be/ language/ en ), which is a performing arts and contemporary art festival that focuses on works that cross the boundaries of the performing and visual arts and presents programs rich in new works and works premiering in Belgium for the first time. As a festival it provides a ‘playground’ for artists from the different genre to have stimulating encounters and provide the audience with a wide art of art experiences. 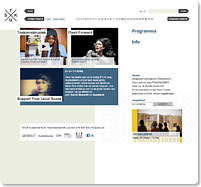