The International Theatre Institute ITI is the world’s largest performing arts organization. It was founded in 1948 by theatre and dance experts and UNESCO with a mission to strive for a society in which performing arts and their artists thrive and flourish. ITI advances UNESCO’s goals of mutual understanding and peace and advocates for the protection and promotion of cultural expressions, regardless of age, gender, creed or ethnicity. It works to these ends internationally and nationally in the areas of arts education, international exchange and collaboration, and youth training.

ITI was officially inaugurated during the meeting of its first World Congress in Prague in June of 1948, organized on the initiative of UNESCO and a group of international theatre experts. It began with 12 Centres in operation in Austria, Belgium, Brazil, Chile, China, Czechoslovakia, France, Italy, Poland, Switzerland, the UK and the USA.

Currently, the close to 100 ITI Centres around the world are the main ITI members, active both nationally and internationally in the various disciplines of the performing arts.

Objectives
To promote international exchange of knowledge and practice in the domain of the performing art
- To stimulate creation and increase cooperation among theatre people
- To increase public awareness of the need to take artistic creation into consideration in the domain of Development
- To deepen mutual understanding and contribute to the consolidation of peace and friendship between peoples
- To join in the defence of the ideals and aims of UNESCO
- To combat all forms of racism or social and political discrimination
Activities to realize these goals
- Encouraging activities and creation that leads to actual performance of the performing arts (theater, dance, music, etc.)
- Expanding collaborations with all types of performing arts organizations in all field, both internationally and domestically
- Establish international offices and foster the establishment of National Centres of the ITI in all countries
- Collect documents, disseminate all types of information and issue publications in the realm of the performing arts. 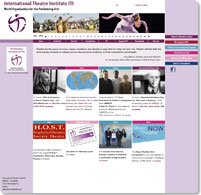