Japan Contemporary Dance Network (JCDN) is an NPO with a nationwide membership of people and organizations involved in all aspects of dance, including artists, presenters, critics, corporations, foundations and other NPOs, etc. It was founded in 2001 following a three-year period of preparations that began in 1998. It’s chosen mission is “to establish points of contact between the society and dance” and pursues programs in the areas of building systems for nationwide performance tours, support for artists’ creative activities, networking with the overseas dance community, creating forums for exchange of dance-related information, conducting surveys and research and promoting the spread of dance. Through these interactive activities JCDN seeks to enrich and strengthen the environment for dance.

As a platform for nationwide performance tours, Odori ni Iku-ze!! (We’re Gonna Go Dancing!!) was launched in 2000. It is a program in which four or five dance artist groups perform in a showcase style, and in its first ten years 258 dance groups have participated in performances in 48 cities in 29 of Japan’s prefectures. From 2007, tours to Asian countries were begun and thus far performances have been held in 13 cities in seven countries, including Cambodia, China, Indonesia, Malaysia, the Philippines and Vietnam (the performances in China have been sponsored by the Japan Foundation). Since its 11th year in 2010, the program has been reoriented as one for creating dance works under the name “ Odori ni Ikuze!! /Second.” It solicits ideas for new works and selects artists/works in two categories: A/ Production Support Program and B/ Regional Dance Creation Program. Since this reorientation, six to eight works have been created each year through regional “Dance in Residence” projects and in the two years performance tours have visited seven cities.

As the “JCDN New Works Creation Series” DANCE×MUSIC! Was launched in 2004 as a series bringing together choreographers and musicians in collaborations to create new works, and since then seven new works have been created. From 2010, film has been added to reorient the program as DANCE×MUSIC×MOVIE!.

In the area of disseminating dance-related information, the “JCDN Dance File” is published (as a magazine and DVDs from 2000-2006 and presently as a website) introducing the activities of dance professionals (artists, critics, producers, theaters, etc.). In addition to maintaining and updating the website, online ticket reservation and video distribution services are also provided.

JCDN also devotes efforts to overseas networking and organizing international collaboration projects. Programs include the Japan-USA Choreographer Residency Exchange Project (held biennially since 2002), the International Creative Residency Project (since 2002), the Australia-Japan Residency Exchange Project (AJdX) (2006) and more. There is also a program the offers coordination assistance for artists participating in festivals both in Japan and overseas. These activities were recognized by the awarding JCDN the Japan Foundation’s “Global Citizen Award” (2006). Recent activities include the launch of a “Japan/Finland Contemporary Dance Residence Exchange Joint Creation Program” in 2011 for the creation of collaborative works and performance tours to various countries.

In recent years, JCDN is also concentrating efforts on putting “the power of dance” to use in community dance programs in cooperation with public halls of local governments and foundations nationwide. In 2008, a “Dance Life Festival 2008 – Dance can save Japan” series was established and festivals were held at seven locations around the country. A “ Community Dance no Susume ” pamphlet is published and a website “Community Dance JAPAN on Web” is operated in an ongoing project encouraging everyone from children to the elderly to participate in dance programs around the country. 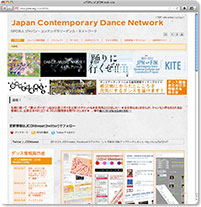