Held biennially in Dusseldorf, Germany, internationale tanzmesse nrw of recent years is an international contemporary dance marketplace and festival platform that gathers many dance professionals from around the world. The first internationale tanzmesse nrw was held in 1994 as an initiative of the North Rhine–Westfalen (NRW) Contemporary Dance Association, the city of Essen, the NRW Ministry of Culture and the NRW Foundation of Arts and Culture. The original goal of the Tanzmesse was to create a platform for dance companies from North-Rhine Westphalia that would introduce and present dance from the region to a larger regional audience as well as to promote networking among dance professionals. In 1997 the second Tanzmesse in Essen expanded the marketplace to include international companies and organizations to become a “World Market of Dance Regions.”

In 2002 the name was changed to internationale tanzmesse nrw and the event relocated to the City of Dusseldorf to take advantage of additional stages and the excellent facilities at the NRW-Forum Kultur und Wirtschaft. There it was held on a biennial basis over four days at the end of August on a larger scale than before. In 2010, a new record was set by the internationale tanzmesse nrw as it attracted more than 1,000 dance professionals from 42 countries, including dance companies, choreographers dancers, agents, performance organizers and people in dance education.

The event featured over 100 exhibition booths of companies, agents and arts facilities providing information about their activities, and works were performed in the dance houses and theaters of Düsseldorf. The performances fall into two programs, the Performance program for stage performances of already finished works and the Open Studio program where presentations of works in progress are made in a studio atmosphere. The festival is also known for the consistent quality of the more than 50 showcases presented.

Today the internationale tanzmesse nrw is an international marketplace for dance professionals from around the world to contract works for performances, a networking venue, a platform discussion on dance and a festival where dance audiences can see cutting-edge contemporary dance. 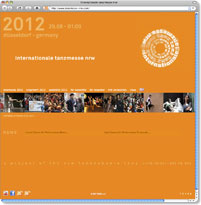