The objectives of PARC are (1) to organize basic data regarding performing arts, (2) to build information and human networks related to the arts and (3) to disseminate unique works around the world with the aim of creating and enhancing artistic expression. In doing so, PARC seeks to promote international exchange and regional activities with a focus on performing arts, to widely support the advancement of arts and culture and activities with that aim in ways that contribute to society.

The Tokyo Performing Arts Market was established in 1995 as an event for international distribution of performing arts works. From 2005, however, it started to focus more on international networking of professionals involved in contemporary performing arts. In 2011, it moved to Yokohama and changed its name to the Performing Arts Meeting in Yokohama. While keeping the abbreviation “TPAM,” the “M” has been changed from “Market” to “Meeting” to clearly express the current nature of the event as one presenting showcases directed by presenters who lead the newest movements of independent performing arts in Japan, showcases in partnership with Japanese and overseas arts organizations, a fringe-style program “TPAM Showcase” that invites participation of performing arts companies, as well as holding seminars and programs for networking. PARC has also organized the IETM Asia Satellite Meeting in Tokyo (2008) and in Yokohama (2011) in close partnership with IETM and other Asian platforms.

The Postmainstream Performing Arts Festival (PPAF) was launched in 2003 with a focus on the more “fragmentary, experimental and independent approaches of artists of the ‘postmainstream’” rather than the “integrated, comprehensive and universal approaches of the ‘mainstream’.” The festival has presented Japan premieres of works by PME-ART, Mayu Kanamori, Forced Entertainment, MaisonDahlBonnema and Hotel Modern and has introduced artists such as Takao Kawaguchi, chelfitsch, Zan Yamashita and Fuyuki Yamakawa. Also, as individual projects, PARC has introduced such companies as Compagnie Marie Chouinard and Rotozaza.

As a project in association with the Performing Arts Meeting in Yokohama (TPAMiY), PARC has organized the “TPAMiY Summer Session” in August 2011, bringing together artists and professionals involved in performing arts to discuss the situation after the Great East Japan Earthquake. Among the participants were Hidenaga Otori (theatre critic), Masashi Goto (Doctor of Engineering and former nuclear reactor containment vessel designer), Kyohei Sakaguchi (writer, artist), Itaru Mita (critic) and Akio Miyazawa (playwright, director, novelist). The program details are on the website. 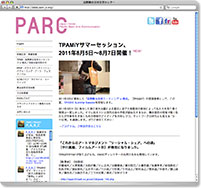