Pro Helvetia was formed in 1939, on the eve of the World War II, to defend Switzerland’s independent cultural identity. It was transformed into a foundation under public law in 1949. In 1965 the Arts Council’s mission, as follows, and organizational form were laid down by law, which extended its grant activities:
_ to preserve and maintain Switzerland’s cultural identity, with particular attention to folk culture
_ to promote cultural creativity, on the basis of the situation in the cantons, in the linguistic regions and in cultural circles.
_ to encourage cultural exchange among the linguistic regions and cultural circles within Switzerland
_ to foster cultural relations with other countries

Establishing its first international liaison office in Paris in 1985, Pro Helvetia has been expanding its international activities. Now it has liaison offices also in Cairo, Warsaw, Cape Town, New Delhi and Shanghai. The financial source is the federal government, but decisions are made independently. Currently 25 members appointed by the Federal Council form the Board of Trustees, and these members are divided into working groups according to the area of expertise and form the Executive Committee that oversees the operations of the Secretariat, which consists of two sectors: the Funding and Cultural Promotion Sector and the Programmes Sector. The Culture Promotion Act that will be enforced in 2012 will restructure the organization and define new tasks.

The budget for the period 2008-2011 was 135,000,000 francs. 48% of approximately 3,400 applications per year was approved, and grants ranging from 500 francs (e. g. subsidy for travel expenses) to 300,000 francs (e. g. large scale project involving several disciplines) were distributed. 42% of them was Swiss projects, 33% was European, and 25% was of other parts of the world. In terms of genres, visual arts received the biggest part of the grants, but the total of music, theatre and dance exceeds it. Qualities that guide Pro Helvetia’s activities are experimentation, difference and common ground, controversy and critical debate, respect and cultural learning, all of which are described as values of art. Supported projects and grant amounts are reported on:
http://www.prohelvetia.ch/Projects-Supported.133.0.html?&L=4

And information on Swiss projects are disseminated from the website “Compass”:
http://compass.prohelvetia.ch/

Moreover, taking up themes that are important in terms of Switzerland’s cultural identity or cultural policy, or selecting geographical areas with which long-term partnership in international cultural exchange should be built, various initiatives such as “Ménage” that considers dialogue between culture and politics through a traveling exhibition “Helvetia Park” and other events, “GameCulture” that approaches diverse creative activities in the game industry regarding them as new art forms, “Arts and Audience Programme” that aims for long-term development of cultural outreach in Switzerland, exchange projects with Chile and Argentina that celebrated the 100th anniversary of the independence in 2010 (including “Ciudades Paralelas, ” the interactive performance festival curated by Stefan Kaegi and Lola Arias), and “Moving Words” that focuses on the importance of translators in literature of Switzerland, which has four official languages, are ongoing. 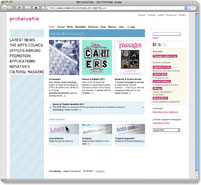