CID was established as an umbrella organization that covers all the dance forms in all the world in 1973. The office is located in the UNESCO Headquarter in Paris, and it is recognized as an international organization for dance by UNESCO and governments, but it is independent from UNESCO as an organization. The abbreviation is from the French name "Conseil international de la danse." The first president was Kurt Joos, the German expressionist choreographer, and the current president is the Greek sociologist / dance historian Alkis Raftis. Based on the idea that dance is universal as an art form, educational means and object of research, CID treats all kinds of approaches to dance equally as far as prejudices in terms of race, gender, religion, political affiliation or social status are not involved.

As of 2009, CID holds more than 600 member organizations and 4,000 individual members from 155 countries, as the nickname "The United Nations of Dance" suggests. The country with the biggest number of members is Greece (966 members), and the United States (403), India (243) and France (211) follow. There are 42 Japanese members. Email information "CID Circular" has been sent to more than 100,000 dance professionals of 200 countries. Members receive various information and have opportunities for networking with other members, and can add their names to the directory, which is open to public, on the CID website.

CID does not organize projects such as festivals, workshops or competitions and does not work on profit-based activities, but the genres and nature of the members\' activities are not restricted. Not only artists, presenters and arts organizations, but also businesses can be members as far as their activities are directly connected to dance (makers of dance shoes, etc). Membership fees a year are ?55 for individuals, ?110 for organizations, ?250 for associate members who engage in CID more closely and actively participate in its activities), and ?30 for students under 30 years old.

In the World Congress held in cooperation with local CID sections, approximately 400 people from 40 countries of five continents participate annually. Recently, World Congress was and is going to be held in Argentina (January), Turkey (April), Russia (April) and Greece (July). Presentations and discussions based on research reports, classes, lectures and performances are programed for five days. General Assembly is held every two years, and the next Assembly is planned to be held at UNESCO in Paris in 2011. Furthermore, CID has been working on such projects as promotion of dance events on April 29, which was defined as "Dance Day" in 1982, publications of books on problems around dance, dance history, poems on dance in various languages, stamps depicting dance in each country and report of World Congress, and recording of traditional dance repertoires across the world. 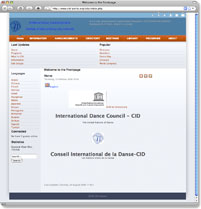