An NPO that was established in 1975, funded by the Ministry of Culture and Communication of France. Its missions and goals are specified in the triennial agreements signed with the Ministry. ONDA focuses on dissemination within France and international exchange of contemporary performing arts that are concerned with the renewal of forms, covering all disciplines.

The team of ONDA sees 1,200 performances each year, and has built partnership with a significant number of venues, institutions and festivals in and outside of France (currently, Aichi Triennale, F/T and SPAC are listed from Japan). Based on this accumulation of information and expertise, ONDA gives advices to artist about networking and dissemination of their works and to programmers about discovery of new works and young artists, through around 700 consultations, 50 meetings and a number of informal discussions every year. Around 800 venues and institutions and 3,000 professionals participate in these meetings. Information sharing is also conducted through publications such as "The Onda Newsletter" and "The Onda Report" as well as the website.

Onda’s support is basically aimed at dissemination of works, so individual works themselves or venues’ activities in general are not targeted. Supports are mainly given to venues at a specific hosting of a specific work (outside of the region the work was produced). In 2009, ?2,303,973 was distributed to 1,135 guarantees realizing 2,544 performances of 767 works by 644 artistic teams. Supporting programs for traveling costs in national tours and programs specializing in music have also been developed.

In order to promote international programming by French programmers, "Scouting Trip" in cooperation with foreign festivals and events, "Destination" in collaboration with local partners, mobility grants, as well as supports for traveling costs and/or surtitling in tours in France of foreign productions have been organized. In relation to Japan, in 2009, While Going to a Condition and Accumulated Layout by Hiroaki Umeda and Utopia? by Oriza Hirata , Amir Reza Koohestani, and Sylvain Maurice were supported. For international dissemination of French works, showcases such as "Focus théâtre" and "Focus danse" are organized with Culturefrance and other partners, and training programs for international activities of professionals are developed.

ONDA is also a founding member of IETM , and it has initiated a platform "SPACE (Supporting the Performing Arts Circulation in Europe)" with such missions as exchanges among young programmers and establishment of an online tool "Travelogue" for data gathering and analysis to reinforce mobility and to resolve imbalances among countries in Europe. The founding members of the platform are ONDA (Paris), Vlaams Theatre Instituut (Brussels), Theatre Instituut Nederlands (Amsterdam), ITI (Berlin), New Theatre Institute of Latvia (Riga), the British Council (London), Ente Teatrale Italiano (Rome), Pro Helvetia (Zurich), The Red House Centre for Culture and Debate (Sofia), and the Art and Theatre Institute (Prague). 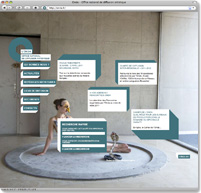