Amrita Performing Arts is an international NGO (US nonprofit status) based in Phnom Penh, Cambodia. Its mission is to revive and preserve traditional performing art forms of Cambodia, the existence of which had been seriously threatened during the rule of the Khmer Rouge regime. “Amrita” is a Sanskrit word meaning “eternity,” and it reflects the organization’s mission, suggesting the things that live on forever despite attempts to destroy them.

After working as production head and stage director at several opera houses in Europe and the US, the executive director, Fred Frumberg, came to Cambodia in 1997 to work as a consultant with UNESCO before establishing Amrita Performing Arts in 2003. The organization’s main supporter was the Rockefeller Foundation. Due to the impact of the recent financial crisis, however, as of January 2011 it has entered an administrative collaboration with Cambodian Living Arts (CLA), an organization with a similar mission to that of Amrita (Frumberg continues to run the organization). Donations of any amount can be made by check or online at ( http://www. amrita performingarts. org/ donation. asp ).

In addition to programs for reviving and preserving of traditional Cambodian performing arts, Amrita has been working to support the activities of young artists and promote contemporary dance and theatre that is relevant to the realities these young artists face today. Furthermore, it functions not only as an organizer but also as a production company for local dancers, engaged in multifaceted activities including production, residency programs, organizing international collaborations, workshops and the like. In relation to Japan, Armita has worked on research and documentation projects supported by the Japan Foundation and Toyota Foundation, and has hosted a “We’re Gonna Go Dancing!!” series event by JCDN (Japan Contemporary Dance Network) in September 2009, in which Takiko Iwabuchi choreographed a work for eight Cambodian dancers.

Amrita has recently produced Khmeropédies I & II choreographed by Khmer/French choreographer Emmanuèle Phuon, 3 Years, 8 Months, 20 Days and Breaking the Silence directed by Dutch director Annemarie Prins and a collaborative project titled Transmission of the Invisible with Peter Chin, a Jamaican choreographer based in Toronto, and his company Tribal Crackling Wind. These productions have toured in Cambodia, the US, Canada, Singapore and other countries. Workshops with the director Francesca Zambello, playwright Lynn Nottage and choreographer Ea Sola have also been held, and an exchange/collaboration project by TheatreWorks (Singapore) “Flying Circus Project” was hosted.

Currently, new creations by Arco Lenz with seven Cambodian dancers (to be premiered at Singapore Arts Festival in May 2011) and by Peter Chin with five Cambodian dancers (to be premiered in Toronto in February 2011) are in the works. Also, an exchange project is in the works that will tour 3 Years, 8 Months, 20 Days and Breaking the Silence , both of which are plays based on testimony from survivors and perpetrators of the Khmer Rouge atrocities and injustices, in Rwanda in April 2011 and then bring a Rwandese play to tour in Cambodia. 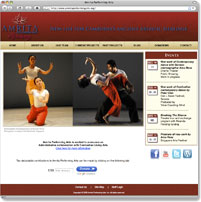