Jacob’s Pillow is an organization based in Becket, Berkshire County, Massachusetts with a mission to support dance creation, presentation and education. Its site on a hill with theaters, a cafe, a school, archives and other facilities was recognized as a National Historic Landmark in 2003 for its contribution to culture. The name “Jacob’s Pillow” derives from a hilltop farm dating to the late 18th century that got its name from the switchback road that resembled Jacob’s Ladder and a pillow-shaped boulder reminiscent of Jacob’s pillow.

The organization’s activities in Becket go back to 1930, when Ted Shawn, the choreographer and leader of the Denishawn Company that produced such dance legends as Martha Graham, purchased the Jacob’s Pillow farm and made it his base of activities. A series of “Tea Lecture Demonstrations” that Shawn began in 1933 became the forerunner of today’s prestigious Jacob’s Pillow Dance Festival, which by 1940 was already an international festival. The Ted Shawn Theater built in 1942 as America’s first dance-specific theater is still one of the festival’s main venues.

The Pillow went through management difficulties in the years after Shawn’s death in 1972, but from the 1980s to 1990s, such leaders as Liz Thompson and Samuel A. Miller built the basic structure of the organization’s current activities. Ella Baff, the current executive director since 1998, has been leading the Pillow in new directions while maintaining its tradition of honoring the diversity of dance.

Aside from the festival, the Pillow has been supporting dance through a variety of programs. The Jacob’s Pillow Award, which is presented annually at the Season Opening Gala, gives a $25,000 prize to choreographers at various stages of their careers to support their activities. Recent winners have been Alonzo King in 2008, Merce Cunningham in 2009—whose company gave its final performances during his lifetime at Jacob’s Pillow—and Bill T. Jones in 2010. The Pillow’s Creative Development Residency Program offers artists a one- to three-week creation period with unlimited studio use, free housing and access to the archives. In 1988, Ushio Amagatsu of Sankaijuku collaborated with composer Philip Glass to create the work Fushi under this program using American dancers.

The organization also runs The School at Jacob’s Pillow, which has produced such famous alumni as Meredith Monk and many other talented artists. It is known for the excellence of its faculty in ballet, tap dance, contemporary dance, jazz/musical and choreography. Community Programs for a wide range of Berkshire residents are also held throughout a year. In addition to the dance classes for participants of all ages and all stages of experience, professional training courses are also held in cooperation with local educational institutions for utilization of dance in curricula from the elementary to the high school level.

To rebuild the outdoor stage called Inside/Out, which has been used for over 200 free events such as emerging artists’ performances, sneak previews and performances of dancers of The School at Jacob’s Pillow every year since its construction in 1981, the Pillow is now seeking donations to raise $100,000 by September of this year.
http://www.jacobspillow.org/savethestage/savethestage.php 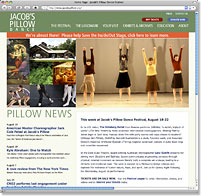