Arts Network Asia (ANA) is a group of independent artists, cultural workers and arts activists that was founded by the Singapore-based director Ong Keng Sen and other arts professionals primarily from Southeast Asia to encourage and support regional artistic collaboration within Asia. ANA provides support for a wide range of projects in the visual arts, film/video/media arts, performing arts, literature, critical discourse and technical training and arts management. It is an organization that promotes meaningful collaboration between artists and communities based on mutual respect for the highly varied culture of Asia.

The organization receives funding from the Ford Foundation and the Asian Cultural Council through special funds from the Rockefeller Foundation. From 1999 to 2003, the administrative functions were performed by Ong Keng Sen’s company, TheatreWorks. From 2004 to 2006, those responsibilities were performed by Malaysia’s Five Arts Centre . Since 2007, the administrative duties have returned to TheatreWorks. The current ANA director is Tay Tong.

1. Projects that are carried out by Asian artists, residing in Asia;

2. Projects that are to be initiated and implemented in Asia, engaging with Asian artists and arts communities;

3. Projects that maintain a focus on Southeast Asia.

ANA provides support for projects that encourage provocative exchanges and collaborations between and among various cultures and communities within Asia. The focus is on the contemporary experience of Asia, including its relationship with traditions, thus involving urban expressions, contemporary arts and their relationship to traditional arts, as well as the encounters between the traditional arts. ANA allows collaborations and exchanges with diverse cultures within the same country or the same city and would look into the potential of local-regional-global complementation.

ANA currently operates in eleven languages (English, Chinese, Indonesian, Japanese, Khmer, Korean, Lao, Sinhalese, Tamil, Thai, and Vietnamese) and project applications can be written and submitted in any of these languages. With its policy of stressing the importance of process versus results, support includes transportation costs within the Asian region. Grants range from US$1,500 - 7,500 per project. The projects and organizations that were recipients of ANA grants in 2009 are as follows. 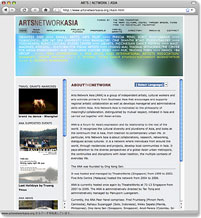