Established in February of 2009, the Japan Fundraising Association (JFRA; President: Tsutomu Hotta, President of Sawayaka Welfare Foundation) is a non-profit organization dedicated to a founding vision of innovating Japan’s philanthropic culture. It was formed through the joint efforts of organizations engaged in arts and culture, welfare and community development, such as C’s (Society for Creation of a System for Support Civil Activities) and representatives of businesses that are particularly active in corporate philanthropy. With the aim of creating an environment that makes it easier to donators to make donations and the fundraisers of nonprofit organizations to find sources of funding, the Association publishes a periodical titled Fundraising Journal , and provides now-how through seminars and the like, while also presenting policy proposals concerning taxation of donations, promoting education concerning philanthropy and certifying fundraisers. The membership of the Association presently stands at 580.

Since the passing of the Act to Promote Specified Nonprofit Activities in 1999, fundraising has become an important subject of attention for nonprofit organizations. It is said that the average household in Japan donates about 3,000 yen to charities a year compared to an average equivalent to about 200,000 yen for households in the U.S. However, the actual totals of Japanese donations are not really known, due to the presence of unrecorded donations such as for local festivals and disaster relief. By researching the actual state of donating in Japan and supplying information about best practices through seminars and its Fundraising Journal , the Association is helping fundraisers acquire skills and stimulate the philanthropic culture in Japan. The following are the main categories of the Association’s activities.

Fundraising Skill-up Program
This program seeks to raise the skills of fundraisers, share information and encourage market creation through dissemination of information about best practices and recognize outstanding fundraisers, hosting an annual conference and seminars and publishing the Fundraising Journal .
Education Program
This program seeks to help establish philanthropic culture in Japan that enables people and corporations to make contributions to society and also to help create an environment where donators can make meaningful donations with assurance and a sense of relevance though efforts that include designing philanthropy education model projects, promoting donation tax reform and a Donor Bill of Rights as well as promoting a Code of Ethics for Fundraisers. It is hoped that these activities will increase motivation and capacity in the society.
Survey Research Program
This program engages in efforts to establish a methodology for surveying the status of donating in Japan, conduct surveys and publish a white paper on donating tentatively titled “Giving Japan.” It also builds a database as a supplier of information on philanthropic culture to support public service activities.
Fundraiser Certification Program
This program establishes a system for the certification of fundraisers based on the pillars of skill, experience and ethics and holds training sessions and certification examinations to enable registration of Certified Fundraisers. 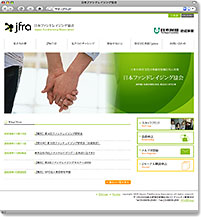