The European Festivals Association (EFA) was founded in Geneva in 1952 under the leadership of conductor Igor Markevitch and philosopher Denis de Rougemont. Amidst the movement to re-vitalize European culture and arts after World War II, 15 festivals came together to form this non-government, non-profit network. Presently it has over 100 member festivals, national festivals associations and cultural organizations from about 40 countries (mainly European but also including the United Arab Emirates, Lebanon, Israel, Mexico, South Korea and Japan, with Japan represented by the Osaka International Festival). Among its associated organizations are also a variety of performing arts networks and national or regional festival associations, whose affiliated festivals bring the grand total of represented festivals to over 1,000. The Association’s activities are divided into the following four main categories.

Communication: The Association coordinates contacts and facilitates information exchange, cooperation and co-production among its members by means of online and offline networking opportunities, a database and newsletter, and by forming working groups and organizing meetings, etc. Besides its members, the Association also provides festival information to the general public through its website.

Expertise: EFA stimulates consciousness of festivals and discussion on related topics through its “EFA Books” Series published since 2006. The latest edition of the EFA Books series, themed ‘Dialogue: Festivals Act for an Intercultural Society,’ features essays by seven festival professionals, including Hortense Archambault, co-director of the Avignon Festival . The Association also hosts the website of the European Festival Research Project (EFRP), a consortium dedicated to research of not only the economic aspects of festivals but a broad range of related topics as well. The reports collected by EFRP are posted on the EFA website.

Training: EFA offers training and educational opportunities through its European Atelier for Young Festival Managers. This one-week program held on a bi-annual basis provides lectures by experienced directors and artists focusing particularly on the artistic aspects of festival organization and operation.

Advocacy: EFA represents festivals in the international cultural debate between the cultural and government sectors, primarily in the European political environment, with the aim of spreading knowledge and understanding of the important role played by festivals. Flagship projects in this realm have included the Arts Festivals’ Declaration on Intercultural Dialogue issued at the occasion of the 2008 European Year of Intercultural Dialogue and the FestLab for Creativity and Innovation initiative launched at the occasion of the 2009 European Year of Creativity and Innovation. Furthermore, in 2008, EFA initiated the European House for Culture, a meeting and working place for networks and initiatives which relate to the cultural sector. The House aims to give the cultural sector in Europe a visible space in order to facilitate a stronger voice of the cultural sector in the European decision-making process.

EFA has its main offices Gent and an office in Brussels, Belgium. The current President is Darko Brlek, director of the Ljubljana Festival. 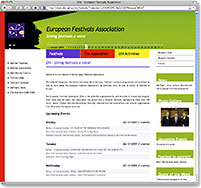