The British Council is the United Kingdom’s international organization for cultural relations and education. Founded in 1934, the Council is registered as a non-profit organization. Approximately one-third of the Council’s budget comes from public funds from the British government while the remaining two-thirds comes from income from English language education programs and other endeavors conducted in collaboration with the private sector, etc. and it operates as an independent government agency not directly under the supervision of any specific ministry or bureau of the government. In addition to programs for international relations in the areas of the arts, science and education, the Council also provides information concerning foreign study English language education and the IELTS test of English language proficiency. Presently the Council conducts operations in approximately 110 countries and regions worldwide that are divided into 12 regional groups in an integrated system. In Japan, the British Council has centers in Tokyo (established 1953) and Osaka (established 1994). The Japan centers belong to the East Asia region and there is cooperation between other centers in the region taking the form of programs like joint study tours to the UK by members of the Japan, Singapore and Australian centers.

With its focus on interactivity in cultural exchange, the Council strives to be a “creative catalyst” that plans, produces and organizing projects, builds partnerships with business, educational institutions non-profit organizations and international agencies and continues two-way relationships after the conclusion of projects, rather than simply engaging in the one-way dissemination of culture or supply of funding. In the field of the arts, the Council involves itself in the full range of British arts, from fine art, design and architecture to theater, dance, film, music and literature with a particular focus on the contemporary arts. The Council is also involved in promoting community and regional development through the arts, its “Creative Cities” program in Britain linking educational institutions and arts organizations and introductions of programs dedicated to the fostering of intellectual assets based on individual creativity, skills and capabilities that can be applied to create value as creative businesses in 13 different fields including advertising, architecture, crafts, computer/video games, design, film, music and the performing arts. The Council also supports networking efforts between Japanese and British government officials, arts organizations and artists, etc.

Recent projects in the performing arts included a holding of the “Dance Life Festival” introducing British “community dance” jointly organized with Japan Contemporary Dance Network (JCDN) from July 2008 to Mar. 2009 that involved Britain, Japan and 10 other East Asian countries and was held as a part of the Creative City series in Europe as well. This project can be considered the culmination of cooperative efforts with JCDN since 2004 which have included the sending of public hall/theater facility representative around Japan to observe the community dance scene in Britain and inviting community dance experts from Britain to give seminars in Japan and tour the country conducting workshops, symposiums and dance performances. There has also been a joint organizing of the “Streetwise Opera” video installations, workshops and forums with the Mother Port Art Festival (Aug. – Sept. 2009). Streetwise Opera is a group that works to help the homeless around the UK become self-reliant by holding music workshops employing the methods of opera throughout the country at a rate of about 600 workshops a year. 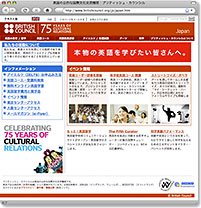