This is the Tokyo branch of Spain’s nationally run Instituto Cervantes, an organization founded in 1991 with the King of Spain serves as the Institute’s Chairman and dedicated to the spread and research of Spanish, a language is spoken by about 400 million people in 20 some countries around the world today, as well as introducing the culture of the Spanish cultural sphere, including Spain and the Spanish-speaking countries of Latin America. The Tokyo branch began operations in September 2007.

The Instituto Cervantes are located in Madrid and in Cervantes’ birthplace, Alcalá de Henares (Madrid State), and in 2004 the first printing a new 400th anniversary commemorative edition of Don Quixote was published. All the international branches of the Institute have begun Spanish courses and implemented the first official certification system for Spanish language ability, DELE. Efforts are also being focused on information supply and a Cervantes Virtual Center website (CVC/Centro Virtual Cervantes) ( http://cvc.cervantes.es ) is online supplying extensive information regarding documents, cultural activities, language and forums has gone online and is currently accessed by some 1.5 million visitors a month from about 100 countries.

Of more than 70 branches on four continents, the Tokyo branch operates on the largest scale, with a hall that can seat approximately 200, 19 classrooms, two exhibit rooms and the Federico Garcia Lorca Library with approximately 7,000 books and a tape and film archive. 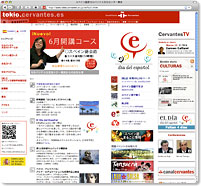