Administered by the ministries of Foreign Affairs and Culture and Communications, Culturesfrance is the country’s largest public-sector arts and culture organization, formed in 2006 as a coupling of its predecessor, the Association francaise d’action artistique (AFAA, founded 1922) and the Association pour la diffusion de la pensee francaise (ADPF, founded 1946). With the aims of promoting French creative arts within France as well as beyond its borders and creating cultural dialogue with other countries, Culturesfrance works to develop networking between public- and private-sector arts and culture organizations at home and abroad through cooperation with embassies in some 140 countries around the world and other affiliated agencies to encourage the presentation of creative arts in their many different forms, in the fields of theatre and the performing arts, visual arts, architecture, books and the written word, the cinematographic heritage and cultural engineering. Special emphasis is placed on promoting the arts and culture in cooperation with French-speaking countries on the African continent and in the Caribbean region.

The annual budget for 2007 announced at the time of the agency’s establishment in 2006 was 30 million euro.

The primary role of the agency’s Department for Artistic Cooperations and Exchanges is providing support for an annual program of major activities initiated with international partners in a production or co-production role. Toward this aim, the department thus organized into two areas: (1) productions and major activities and (2) travel, exchanges and training (support for requests), within which project leaders are responsible for monitoring projects within their sectors.

Culturesfrance also has artist-in-residences programs (program name: Support for creation and the mobility of artists) that give significant support to French creation in every discipline, helping artistes and researchers to travel and stay abroad to create works, do surveys and research. Among the main affiliated overseas organizations involved in these residence programs are Japan’s Villa Kujoyama (*) in Kyoto and New York’s Triangle Studio.


* Established in 1992, the Franco-Japanese exchange center Villa Kujoyama serves as a base of activities for contemporary artists and researchers sent by Culturesfrance or the Ministry of Foreign Affairs (normal period of stay: 4 to 12 months) with the aim of promoting activities in the creative arts between France and Japan. It also cooperates with the House of Japan in Paris run by the Japan Foundation in organizing joint support programs aimed at friendly cultural exchange. 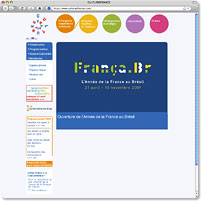