The Japan-US Friendship Commission (JUSFC) is an independent federal agency founded in 1975 as an initiative stemming from the reversion of Okinawa to Japanese sovereignty and with a mission of promoting mutual understanding and cultural exchange in the US-Japan relationship through grant programs for institutions. In the early years the grants were mainly directed toward research and Japanese language study programs at universities and other educational institutions. In 1995, taking the occasion of the Commission’s 20th anniversary and the 50th anniversary of the end of World War II, the scope of grant giving was broadened to include not only Japanese studies in American higher education but also the areas of public affairs, education and the study of the United States in Japanese higher education and the arts, with the aim of promoting more substantial exchange between the US and Japan. The original allocations for the Commission’s operating capital were $18 million from the US government and $12.5 million from Japan (these figures have changed over the years with changes in the economic conditions in Japan and the US).

Applications for grants from the Commission are accepted twice a year and grant decisions are made by a board of private citizens and US government officials, including members of Congress and heads of the departments of State and Education meeting in April and September each year. The present Chairman of the Commission is Thierry G. Porté, who served as President and CEO of Shinsei Bank, Limited until November of 2008. The administrative director is Eric Gangloff. The Commission’s head office is in Washington D.C.

As a grant program in the arts, JUSFC and the National Endowment for the Arts (NEA) jointly conduct the United States/Japan Creative Artists Residency program as an exchange for people in the arts. For this program about five American artists working in the fields of contemporary music, theater, dance, film, visual arts, painting, sculpture, crafts and creative writing are chosen each year to spend approximately six months in Japan to increase their understanding of Japanese culture in the traditional and contemporary arts. During their residencies in Japan the artists are free to interact with Japanese artists anywhere in the country and to pursue activities of greatest relevance to their creative process, including collaborative works with Japanese artists. In the case of works or projects to be undertaken in such cases, they can apply for grants as a “US-Japan Artist Collaboration Projects” based on proposals from both the US and Japanese artists. As for Japanese artists wishing to study in the US, there is a cooperative system by which artists can receive support through a tie-up with Japan’s Cultural Affairs Agency under its overseas study program for artists. The International House of Japan acts as a “window” and point of entry for the American artists sent by the Commission to Japan and provides support for collaborative projects.

The Commission also provides grants for performances by American theater companies and exhibitions by visual artists in Japan. In particular there is a long history of support for exchange in the theater arts, bringing American theater companies to Japan almost every year since the Commission first financed a Japan tour of the American Conservatory Theatre of San Francisco in 1978 with performances of works by Tad Mosel and Eugene O’Neill. Around the same time, the Waseda Small Theater led by director Tadashi Suzuki went to the US for collaborative performances with the Milwaukee Repertory Theater and the Brooklyn Center for the Performing Arts that made Suzuki well known as a director along with his “Suzuki Method” of actor training based on traditional Japanese techniques of physical expression.

The JUSFC also supports the annual American Dance Festival (ADF) held in Durham, North Carolina (2008 marked the 75th ADF) on an ongoing basis, and this festival has been the venue for performances by many Japanese artists and companies, including Sankai Juku, Dairakudakan and Kita School Noh.

However, with the development of commercial-based productions by promoters and the like, there is no longer support for performances on a regular basis, but a high priority is still given for performance tours or exhibitions by American artists to regional cities in Japan other than Tokyo.

The following are the artists and projects chosen for 2009 grants at the September 2008 meeting of the Commission. 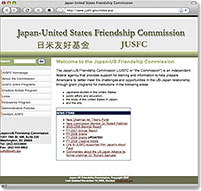