The Andrew W. Mellon Foundation is a non-profit organization established with the endorsement of the New York state government in 1969 with a financial base coming from the estate of America’s wealthy Mellon family and a merger with the Avalon Foundation and the Old Dominion Foundation. Honoring the pioneering philanthropic work of Andrew W. Mellon (1855–1937) in the areas of education, culture and research, the foundation today offers support in the form of grants primarily for institutions of higher education, libraries, independent research centers and museums as well as organizations involved in the preservation of art and cultural assets and orchestras and companies performing arts. Building from an original endowment of $220 million at the time of its founding, the Mellon Foundation presently (2007) has an endowment of $6.5 billion, from which it annually provides approximately $286 million in grants (2007 figure).

In the arts, the Mellon Foundation seeks to achieve meaningful, long-term results by providing grants over a period of several years to organizations and companies active in the fields of art and the performing arts. Being a New York-based foundation, there are an especially large number of grants given to arts organizations and artists active on the New York scene. For example, when the New York Foundation for the Arts (founded 1971) started its “New York Arts Recovery Fund” in the wake of the September 11, 2001 terror attacks, the Mellon Foundation provided a considerable part of its initial $4.6 million endowment from which grants have been provided to 135 organizations and 352 individuals to date.

In its performing arts program, the Mellon Foundation has provided grants to an annual total of $28 million since 2005. These grants go primarily to American organizations and companies in the fields of music (orchestras), opera, theater and modern dance on a multiple-year basis. Although the Mellon Foundation has no program of grants for individual artists, it contributes to the nurturing of new talent through the “New York Theater Program” of the NYFA, which allocates 3-year grants worth $2 million to non-profit theaters or theater companies in New York City once every three years. In 2008, a total of 33 organizations including the Brooklyn Arts Exchange, The Wooster Group and the SOHO Repertory Theater were chosen for these grants. Plans call for the next applications for these grants to be received in 2010.

The Mellon Foundation’s involvement with Japanese performing arts has included providing support in the form of a joint production partnership for the May 2006 performances of “Motorcycle Don Quixote” (Yokohama Red Brick Warehouse Hall No. 1) created by Akio Miyazawa as an international project of his company “U-enchi Saisei Jigyodan.” This project was made possible thanks to the efforts of Stephen Greenblatt, a Harvard professor known for his research in modern English literature.

In 2004, the contributions of the Mellon Foundation were recognized with the granting of the US government’s National Medal for the Arts, the most prestigious award given to patrons of artists and the arts. The present President of the Foundation is the musicologist Don Michael Randel. 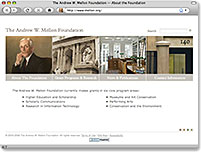